Tra-la, it's June. The garden's half in and so am I. But here's a book to lighten the load, and also to silence that pesky little voice that says you didn't do it justice in teenhood.

Don't forget to click the icon for more reviews! 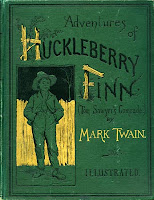 Here’s a confession: I didn’t read Huckleberry Finn when everyone else did, back in middle school or high school. I’ve also never read Moby Dick, and I probably won't catch up with that one. (In college I read everything else Melville wrote, so I figure I’m exempt.)  I still have hope for War and Peace.

What drove me from Huck Finn in my youth was the escaping slave Jim, whose dialect just took too much effort. ( An important lesson to us all—especially me, considering that my first book features a guy who often ta-a-alks like thi-i-is.)

Here’s what Jim says when he thinks he’s confronting Huck as a ghost: “You go en git in de river agin, whah you b’longs, en doan ’do nuffin to Ole Jim, ’at ’us awluz yo’ fren’.”  I didn’t want any part of that when I was a kid.

Also, I think I was uncomfortable with the N-word, which is sprinkled through this text. Although I don’t approve of banning books under any circumstances, or preventing kids from reading any of them ever, it’s clear why this one is a challenge for parents and teachers today. It definitely requires context and a lot of conversation. Both very good things.

All that said, halfway through this reading I announced to whoever was in the room (most likely the dog) that Huck Finn is the best American novel ever written. I bogged down later, but really this is a masterpiece. I started reading it this time around because I’d downloaded it free and I was away from home with my Kindle. I figured I’d dip into it before bed, and suddenly it was two hours later.

Huck is a marvelous character—a young reprobate, happiest lying flat on his back in the shade with a full stomach and a pipe in his mouth. And yet he is a total sweetheart, pretty much a friend to all and without the mischievous spark of his pal Tom Sawyer, hero of the Twain book that introduced Huck to the world. Despite a ramshackle upbringing with a horror of a drunken, thieving father, he is quick to recognize his sins and attempt to atone for them.

It’s this last characteristic that Twain uses to great comic and cosmic effect.

The action takes place along the southern Mississippi River before the Civil War, when slavery was in full cry. On the lam from his evil father, Huck ends up on a raft with Jim, who hopes to escape to the free territories of the west. Along the way, they have adventures with a rich, funny, pungent collection of con-men, robbers, murders, aristocrats, and common folk.

Here’s the thing: Huck has been taught that slavery is the good and right way of things. He thinks helping a slave escape is a crime, even a sin that will condemn his soul to hell. Because he’s a nice guy and really likes Jim, though, his instinct is to help his friend out and keep him safe. There’s a fascinating battle going on inside of Huck, and we get to watch it play out.

It’s genius. In 1885, twenty years after the end of the Civil War,  Huck’s struggle to dehumanize Jim—and his failure—must have hit home like a howitzer shell.

Most of the book is hysterical, too, although I have to say that I could have done without the reintroduction of Tom Sawyer three-quarters of the way through. His ridiculous attempt to add swashbuckling complications to a simple rescue of Jim goes on way too long, and that’s where the book bogged down for me.  I can’t help thinking that Tom’s there not for the advancement of literature but just because he was such a popular character with readers.

Hey, something had to pay for all those white suits.

If you, like me, managed to escape reading this book in middle school, I urge you to give it another try. Even if you did read it back then, you might want to pick it up again as an adult. It has pleasures and insights you might have missed during the Hormone Years.

Dear FCC: This book was free, and I downloaded it of my own free will. Neither Mark Twain nor his publisher gives two hoots what I have to say about it.