The Unnameables took another step toward being An Actual Book this week. My reaction is odd--in a lot of ways I've moved on to the book I'm working on now, so the excitement is slightly muted. Still, it's excitement, mixed with an Alice in Wonderland sense that none of this could actually be happening.

First of all, The Unnameables got picked up by the Junior Library Guild, which my editor describes as being akin to the Good Housekeeping seal of approval. Second, Blue Hill Books offered to host a reading/signing for Gail Page and me, possibly joined by a third local kidlit writer whose latest book also ships in September. Gail is in my writers' group and is the author/illustrator of the much-acclaimed How to be a Good Dog. The sequel, Bobo and the New Neighbor, is coming out exactly when The Unnameables is.

The reading will be September 25 at the Blue Hill library. I wonder if I'll be able to breathe.

By the way, the Class of 2k8 blog is doing something really, really cool this week--interviewing on-line reviewers. Recommended reading both for readers of reviews and writers of books.
Posted by Ellen Booraem at 8:42 AM 5 comments:

I have now completed an entire five days without touching a manuscript. I'm not happy about this, but I did manage to get a lot of little junk off my "to do" list. The Youth Corps seems like it's in good shape (knock on wood), I finally got more web site pages dealt with, and I even started looking into bookmarks and bookplates and the like.

So that means next week will be writing week, right? Here's hoping.

I'm feeling solidarity with Tiger Woods at the moment. The corisone shot appears to have done very little, verging on nothing, for my poor swollen knee. I begin to suspect there's more going on here than the doctor has diagnosed, which means I'll have to have an MRI. My pocketbook and my claustrophobia are not amused.

My health insurance has a $5,000 deductible because I live in the Land of the Free--apparently, government health coverage would infringe on my freedom. A week or so ago I saw a TV report about some fellow from Europe who was visiting the U.S. to run clinics for poor Americans who couldn't afford even to get their eyes examined or their teeth cleaned. How is our government not humiliated by this?

Uh-oh. This is what happens after a non-writing week. I get testy and political. 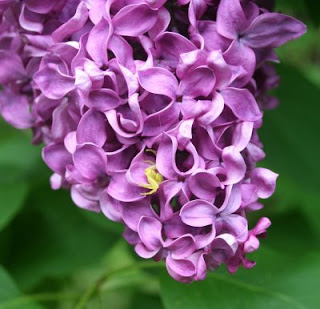 I'm not that much of a naturalist, but shouldn't somebody break it to this spider that his/her camouflage is faulty? Very trendy color combination, so he/she does get style points. But he/she is going to starve to death, or make a nice meal for someone else. Maybe his/her target bugs are color-blind.

This has been a fractured week so far. Lots of Youth Corps prep, a bit of web site organization and photography, a bit of Filioli revision. Got my jacket copy from Kathy Dawson at Harcourt (brilliant), updated my author bio, discovered that the copy of my author photo I have on hand isn't the right resolution and probably the right one doesn't exist, so we'll have to reshoot. (I should reshoot that sentence but it has kind of a loose-limbed charm so I'm leaving it.)

Other than that...just wandering around criticizing other people's camouflage.
Posted by Ellen Booraem at 2:38 PM No comments: 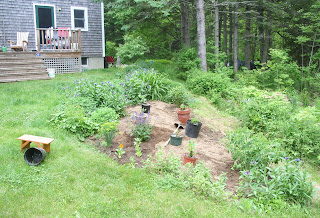 Gardening is under way, and not a minute too soon. Of course, all the hefting and hauling has wreaked havoc on my unhappy knee, which already had havoc wreaked upon it walking around England. Last week the orthopod pumped out a lot of fluid and pumped in corisone, but it still looks like one of those pale squashes with the protuberances. (See how cleverly I brought the topic back around to gardening?)

Other more joyful rites of spring: 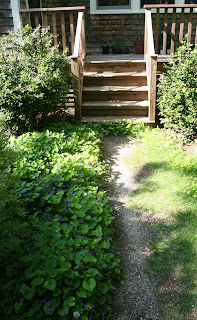 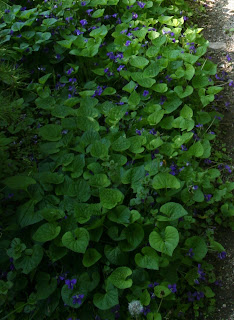 1. Violets! I brought something like five plants up from my mother's garden in Massachusetts about 12 years ago, and now they're EVerywhere. I love the way they crept out under the step. 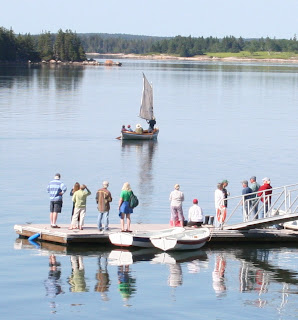 2. Boat launchings! This one took place Saturday morning. A friend of ours was building the boat in his garage for 13 years (his wife says 14) and it's stunning. I wish I'd taken a close-up of the woodwork, which is masterful. But I get self-conscious taking pictures at events like this because eveyone assumes I'm shooting for The Ellsworth American, which I hardly ever am these days. Bad excuse, I know.

3. Graduation! Possibly as a hand-me-down from the days when you assumed you might not bother making it though high school, elementary schools around here have elaborate graduation ceremonies for those leaving 8th grade and heading to high school. Our town's is particularly impressive because each graduate has to make a speech. This year's six graduates talked about individuality. One girl, who happens to be in my writers' group, spoke frankly and cheerfully about what she'd learned from being a social outcast. Hard to do without sounding bitter or self-pitying, but she pulled it off. Good for her.

The kids also hand out flowers to anyone who's helped along the way, mostly parents and teachers but also others in the audience. I got a white carnation from one of my writers, which was a big thrill.

While you're wandering about on-line, you might want to check out the latest 2k8 contest, which offers 2k8 books as prizes. (If I'd been smart, I would have directed you to my agent Kate Schafer Testerman's blog a week or so ago, when she was offering an advance reader's copy of The Unnameables as a prize. I'll be doing the same eventually, but first I want to establish a little more rythm to this blog. Like, more than one post every two weeks.)

Also, Daphne Grab, author of Alive and Well in Prague, New York, is the featured guest on the 2k8 blog. Go Daphne!
Posted by Ellen Booraem at 10:14 AM No comments:

It's been a hectic few days, mostly because of the Youth Corps, our little town's summer youth program, for which I'm board chairman. The program finds paid jobs for kids aged 14 to 17, with 13-year-olds as unpaid apprentice members. We just hired our coordinator and assistant coordinator for the summer, which is a huge relief. Now all we have to worry about is getting our hands on two rental vans (gah!) and getting t-shirts printed up and getting ready for the townwide barbecue the Youth Corps runs on the Fourth, and...and...and.

I'm also wrapping things up with the writers' group I run at the school, reading and critiquing the finished stories. So far, there's a crime story (the class trip money was stolen, but a teenage ace detective was all over it), a dystopian tale set in either the future or an alternate universe (all adopted children are being kidnapped by the government to keep population figures down), and the story of a girl whose father is jailed for a purse-snatch that netted $23 (in alternating voices, first person for the girl, third for the dad in jail).

All in all, pretty cool stories. What they have in common is that the authority figures--parents, police, governments--do not fare well. A good sign, right?

And then, of course, in the odd moments between things...there's what I do for a living. What was that again?
Posted by Ellen Booraem at 3:41 PM No comments:

OK, so this time it's been MORE than a month. I'm a bad, bad blogger.

But I spent three weeks of that time in England! By which I mean London, Devon, and Cornwall, mostly. Here's some of what I saw. (This will be a test as to whether I can figure out how to put more than one photo in a post without having them decide for themselves where they want to be.) 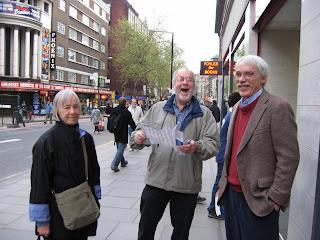 This is Rob (red sweater) and a couple from our little town who are temporarily living in London. We were in the theatre district trying to figure out how to head for Bloomsbury and a comparatively quiet pub. Rob and I spent five days in London, mostly looking at art except for seeing one play (a funny and sharp one by Jasmina Reza, "The God of Carnage," starring Ralph Fiennes.) 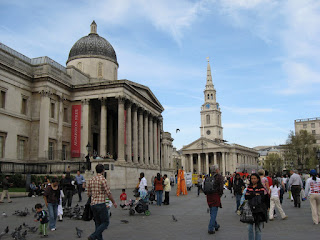 This is "Trafalgar Square, Shillady Departing." (Red sweater, back pack) He's not enthusiastic about cameras, so I took most of the trip in "Shillady Departing" mode. The building at left is the National Gallery, where we spent almost two full days, and the church straight ahead is St. Martin-in-the-Fields, where I went to Sunday services so I could hear church music in its intended setting. 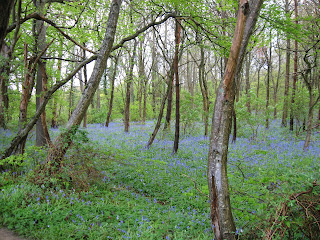 From London we took a train to Brighton to pick up a car and drive across to Cornwall. We started in Brighton so we could go to Charleston Farmhouse, the highly decorated home of the painters Vanessa Bell and Duncan Grant. Vanessa Bell was Virginia Woolf's sister, and I was on an informal, barely conscious Virginia Woolf pilgrimage. (Stayed in Bloomsbury, then Sussex where they all had country houses, then St. Ives, Cornwall, where V&V spent childhood summers). But the Big Excitement the first day out of London was this bluebell wood. 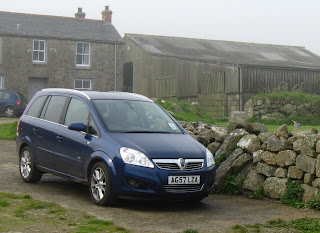 Then we spent four or five days driving this... 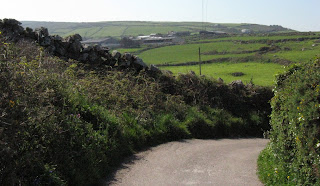 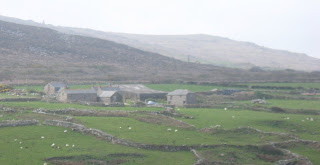 so we could spend a week luxuriating here... 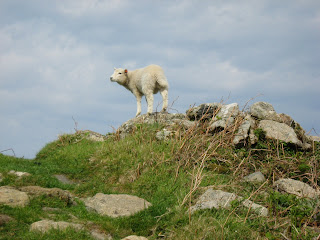 among lots of these--some of which I'm sorry to say we ate.

I did all the driving. Rob is much whiter of head now than he was when we left, mostly because he was the one who was inches from hedgerows and stone walls when I pulled over hastily in the face of rapidly oncoming traffic. He kept muttering, "These people are nuts." I found driving on the left to be less of a problem than getting used to zipping around a hedgerowed corner with no idea of what might be in your path.

I only almost killed us once, though.

And I'm going to be a much, much better blogger now.
Posted by Ellen Booraem at 4:24 PM 1 comment: