A Nip in the Air

It's been an exciting week at Castle Ne'er-do'well. I got a Kindle. The dog had surgery. The air is full of revving-up noises from the October 1 Bangor Book Festival. It's frikkin' freezing out, although six months ago this would have felt warm. I have tomatoes, zucchini, and blackberries in the freezer.

The Kindle is a cunnin' little thing, despite my Luddite tendencies. I got it because I'll be traveling a bit and also I'd like to read my manuscripts without sitting at the computer or manhandling a largish stack of paper on the dining room table. Supposedly you can take notes on stuff you're reading. We'll see how useful that turns out to be. But my goodness, aren't they trying hard to be clever? I was impressed right off by the fact that the USB connection nestles into the power adapter.

The dog, one Calamity Jane Booraem-Shillady, is gray around the muzzle and developing noncancerous fatty tumors in various spots (one of them unmentionable in polite society and undoing a decade of "sit" training). Thursday morning, when Rob was away canoing (naturally--heaven forbid this should happen with a full staff), I discovered that dear Callie had chewed off the bottom fifth of the tumor on her front right ankle. I disinfected it and wrapped it up, but by afternoon it was still bleeding and I was on the phone to the vet. Upshot: It was infected and growing too much.Yesterday morning, the little dear had $700 worth of surgery. Now she has a classy-looking bandage, a dazed expression, and one of those Elizabethan cone things to keep her from chewing at her stitches. Also an impoverished household.

TMI ALERT (skip this if squeamish): The little dear also has a grass-eating fetish, which would be fine if she just threw it up immediately or passed it along through like a normal dog. But no. Our choices are 1) she keeps it fermenting in her gut for three or four weeks, then throws it up at 3 a.m. on the floor at the foot of our bed, where it smells like Death on Eggs, or 2) she gets a blockage and has to visit the emergency room. When I took her in for surgery yesterday, I mentioned that she hadn't pooped for 24 hours. "Hmm," said the vet. And, sure enough, when he'd finished removing her tumor he also extracted a plug of grass from the relevant oriface. Another 24 hours and she would have been writhing in pain, so that's the silver lining to this cloudy tale. END OF TMI.

The Bangor Book Festival takes place September 30 and October 1. (The Maine Edge, an alternative paper, is interviewing the authors involved. Here's my interview.)  I'll be talking about character development and doing a reading/discussion for teens with Carrie Jones. The festival will be in various venues this year, as I understand it--public library, children's museum, perhaps others. More information will be forthcoming, but definitely mark your calendar...just look at that list of authors!

I conclude with pix of my favorite season-changing event: The Blue Hill Fair, which takes place on Labor Day Weekend. I tended the county Democrats' booth in the morning and ate french fries and watched sheepdog trials and livestock shows in the afternoon. Bliss.


Posted by Ellen Booraem at 3:24 PM No comments: 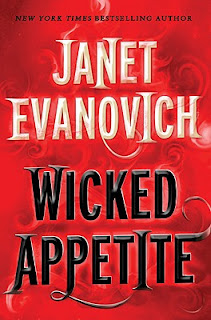 I JUST this minute realized that today's Wednesday, not Tuesday. And I was supposed to post my September book review THIS MORNING.

I am an idiot. See you tomorrow, Book Review Club. *slinks into corner, weeping.*
Posted by Ellen Booraem at 3:58 PM 1 comment:

Science, and an Apology to Vermont

Well, I suppose I feel pretty proud of myself, don't I?


Science has proven that you will suffer an extended power outage under one or more of the following circumstances: 1. You haven't showered in two days; 2. You have a sink full of dishes; 3. The bathroom is a pit of iniquity. So it was that I spent the 24 hours before Hurricane/Tropical Storm Irene showering, cleaning the bathroom, and washing every dish and teaspoon before it hit the sink. I also vacuumed.


Also, Rob moved the cars into the back yard next to the house. (To avoid this.) 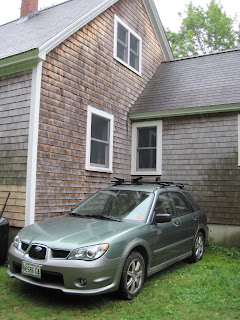 I picked all the flowers in my garden, arranged some in vases, gave the rest to a neighbor. 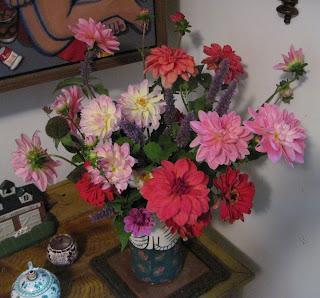 I moved all the plants inside from the deck. For something to do rather than fidget, I re-filled about half of the emergency water bottles in the cellar with fresh water.

As a natural and scientifically proven result, Irene moved west and whupped the tar out of Vermont. We had a little wind, less rain, and asix-hour power outage (child's play around here)﻿.

Again, I deeply apologize to the people of Vermont.

If someone has planned a surprise birthday party for you, that will be the night you exercise-bike yourself into a sweat and opt not to take a shower afterwards because dinner's ready. You will also have laundry drying on racks all over the living room.

And so, two nights before I was scientifically scheduled to turn sixty, Rob leaped up in the middle of the Nightly News and said brusquely, "I'd get the laundry upstairs if I were you. That's all I'm saying." He then walked out the front door into the night.  I followed, and discovered twenty-five or thirty people standing in the front yard, each holding a cupcake.

I swore in hospitable fashion and ran inside to haul the laundry racks upstairs.

Turned out Rob had hand-delivered invitations to everyone, instructing them to show up with one cupcake apiece. (So that's why the morning coffee run kept taking so long. I thought he might be having an affair.) Here's most of them: 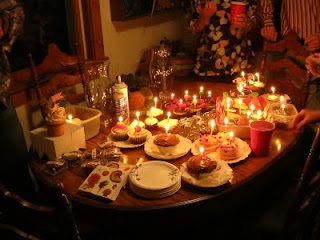 One pair was equipped with sparklers, so Rob lighted them out on the porch. 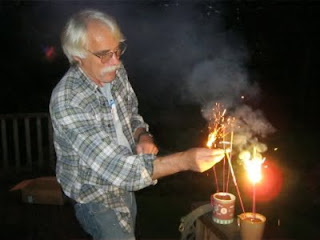 I looked like utter crap. I was, however, very happy. Here I'm holding one of two T-shirts our neighbors Lisa and Peg made for the occasion. Rob (seen frantically unearthing snacks) is wearing the other. They say, "Our favorite small person with wings is 60." 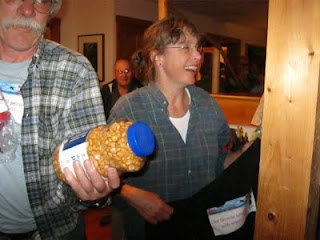 Lisa and Peg also made cookies to top their cupcake entries, featuring a frog dressed in panoply. You have to read SMALL PERSONS WITH WINGS to understand that, ditto the fact that there are a few Tampax-shaped cookies in there. 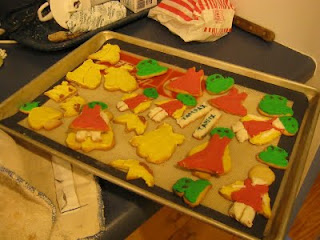 Lisa and Peg also made this video. They do not believe in half-measures when it comes to celebrations.