It's spring even  in Maine now, and a slim book is just what you need: easy to carry in your beach satchel, quick to read in between bouts of gardening. I'm not entirely enthusiastic about this one, but if you've enjoyed earlier books by David Mitchell you might like it fine.

The Book Review Club is taking July and August off. Click the icon above for more reviews, and see you in September! 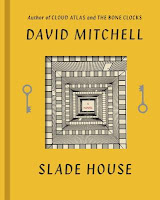 A lesson to us all, that’s what SLADE HOUSE is. Up to now, I’ve occasionally pondered whether the absolute necessity for a character to be the agent of his own fate was just a kidlit/YA thing. If you were writing for adults, could you get away with a deus ex machina, medieval drama’s god-figure descending to solve everything?

In SLADE HOUSE, David Mitchell answers that question. No, you can’t.

Mitchell is the author of THE CLOUD ATLAS, which I haven’t read, and THE BONE CLOCKS, which I liked a lot. Most—if not all—of his novels take place in a universe that contains “atemporals,” immortals who jigger about with time and with us. There are bad guys, the vampiric Anchorites who suck our souls to stay alive, and there are good guys, the Horologists who try to save us. The books aren’t sequential (they couldn’t be, messing with time as they do) but familiar characters reappear. In SLADE HOUSE, there’s a reference to “bone clocks” (that would be us) and the deus ex machina is a Horologist called Marinus, known to us from the previous book.

There’s a lot to love about SLADE HOUSE, and Mitchell’s universe is intriguing as hell. (I may mean that literally.)  The central characters in this round are a set of twins who’ve become Anchorites. They inhabit a very cool London mansion called Slade House, and keep themselves and the house going by imbibing the soul of an “engifted” human every nine years. (I’m not sure what “engifted” means—psychic, maybe. The term may originate from THE CLOUD ATLAS.) Mitchell can be an entrancing writer, and he's having fun here, which is endearing.

This is a slim volume with five sections, one for each soul under attack, set every nine years starting in 1979 and ending in 2015. (The first section apparently debuted on Mitchell's Twitter feed. Huh.) Four sections are told from the point of view of an imbibee, while one of the evil twins narrates the last one.

Therein lies the problem. The evil twins are just evil, not at all compelling as characters, and they're the ones we're visiting the most. The victims are more fun to hang out with, but we get to know them a-a-a-almost enough to care about them and then they’re gone and we’re off to the next case. Each victim appears once more as a vague, ghostly residue trying to warn a successor, but otherwise none of the humans takes any lasting action. It’s up to Marinus the immortal to swoop in at the end, out of nowhere except the previous book. The human reader closes this book feeling flat and cheated. At least I did.

It doesn’t help that I read this just after Salman Rushdie’s TWO YEARS, EIGHT MONTHS AND TWENTY-EIGHT DAYS, in which warring jinn bring their battles to earth with humans as either pawns or allies. The contrast was telling. We know the heroine jinnia very well, having followed her through the book. Her human allies are well known to us and instrumental in their own salvation.  It’s a masterful, soul-filling tale. SLADE HOUSE, taken by itself, is not.

Now, here’s the thing. In a multi-course meal, SLADE HOUSE may be intended only as a garnish. THE BONE CLOCKS, although it had its faults, was a far more substantial and satisfying experience, and I have every intention of reading THE CLOUD ATLAS to make sure I’m prepared for the future.  A few books from now, we may be sitting back, loosening our belts, and calling for a toothpick.

(Dear FCC: I bought this book for my beloved. It was either for Christmas or his birthday, which is exactly one month before Christmas and a total pain in the prat for the gift-giver. Do something about that, would you?)