Illustrator/Mapmaker Ian Schoenherr and 14-year-old man-about-town Nolan Ellsworth said things about maps in fantasy books that I couldn't fit into my December 14, 2009, post at The Enchanted Inkpot. So here they are, plus a few comments from Diana Wynne Jones. 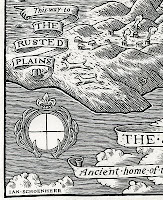 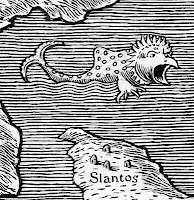 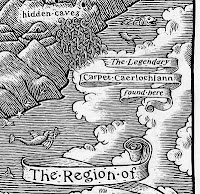 Details of Ian Schoenherr maps, left to right: Fincayra from THE LOST YEARS OF MERLIN, and two of the Smoking Cliffs from THE FIRES OF MERLIN, both by T.A. Barron. The detail below left is from a map of Kugisko in COLD FIRE by Tamora Pierce.

EB: Do mapmakers recognize certain "types" of maps that appear in fantasies (or books in general)? Does an editor call you up and say "I need a _____ map for a book I'm working on."

IS: Usually editors and art directors don't fill in that particular blank - they just tell me they want a map for a fantasy novel and later we sort out how detailed or spare and how serious or whimsical it should be.

EB: What information do you generally need from editor and author in order to create a map? Do you need to read the book, or is information you get from editor/author enough?

IS: Authors generally include a sketch and other notes with their map "dossiers" - for want of a better word. And the more information they give me up front, the better. I admit that I haven't read all the books for which I've made maps, but I usually like to have a copy of the manuscript on hand in order to look up descriptions of unusual details - and so I can avoid badgering the editor, art director, and author - and/or having to make time-consuming or costly alterations to the finished artwork.

I like when the author has a clear idea of what they want and where they want it on a map, and when my job is, in essence, to "translate" their rough ideas into something more finished or aesthetically pleasing. I'm not so fond of extensive Legends or Keys on maps: I'd rather have the place names and other notes be part of the picture, not part of a list in a box along side - the latter approach is too "dry" for me and not much fun to draw or to look at. It helps, too, if the map is on the endpapers as it can get lost or overlooked when it's wedged inside the pages.

My most satisfying mapmaking experiences came when I was working on T. A. Barron's Lost Years of Merlin series. The initial assignment came from Patti Gauch, my editor at Philomel, who liked the way my sketchbook pages looked: lots of tiny drawings and hand-lettered notes to myself. She thought I'd like to try making a map, so Tom Barron sent me his sketch of "Fincayra" and I made a pencil drawing of the correct proportions of the book and then I looked at - and swiped many elements from - drawings by Howard Pyle (his banners in particular) and engravings by Peter Bruegel and Albrecht Durer (especially his clouds), since I wanted to emulate Renaissance-era maps.

After my preliminary drawing was OK'd, I used a lightbox to trace the drawing with permanent ink onto thin, white scratchboard and then I developed the drawing as much as possible before refining it with an old lithographer's scratching tool my father used to use. Scratchboard is still my surface of choice because I can make corrections easily and get a wood-cut or engraved look. I did three more maps for the Merlin books and all were fun collaborations as Tom liked that I would add little creatures and things, and he was happy with my more whimsical, kitchen-sink approach.

Since then I've accumulated a bunch of books on old cartography. Two of my favorite map makers are Sebastian Munster and Martin Waldseemuller - I like their line quality and the way they incorporated typography into their maps. I also stare a lot at Thomas Bewick's wood engravings for his funny details and the comic maps of John Held Jr..

EB: When do you consider a map in a book to be a success?

To me, maps - and illustrations in general - are best when they capture the spirit of the text and evoke the world that's described in the book.

My absolute favorite maps in books are the ones Ernest H. Shepard made for "Wind in the Willows" and "Winnie-the Pooh". They're completely different from the style I've fallen into, but what I love about them (and what I look for in other maps) is how they hold my attention - they make me want to go to the places depicted and, most importantly, they make me want to read the books.

EB: How do you envision a reader using the maps you create?

When a book comes with a map, I'm always referring back to it as I read (which is another reason why I think an endpaper map work best - it prevents constant page-flipping), so I envision the reader doing that, too. I think "Geography is History" even in made up places: how can you understand what happens in the world if you don't know where things happen? So I hope my maps will help readers picture the setting and feel more invested in and connected to the author's world.

I like fantasy maps primarily because they look cool. A fantasy map should be hand- drawn and fun to look at. If a map of a magical land is some mass of computer-made, perfectly straight black lines and symbols, it kills the feeling of a fantasy book and just takes up space on the page.

The interesting thing about fantasy maps is that, unlike maps of our world, we do not use them do find out how to get somewhere. We don't need to go to Rivendell, so a map won't help us in that respect. We use them to track our character's course, to orient ourselves within our character's world, and to feel connected and a part of that world.

I have three books beside me; one is THE HOBBIT, one is THE LAST OLYMPIAN, and one is this very strange book called THE UNNAMEABLES. All of them have hand-drawn maps in the beginning.

As for THE HOBBIT, a map of Middle Earth is perhaps the ultimate fantasy map of all time. From the vast forest of Mirkwood, with every tree individually drawn and spiders hidden throughout, to the Lonely Mountain, this map is Tolkien's way of saying "I know everything about my fantasy world! Top that, C.S. Lewis!" THE HOBBIT is the story of a journey, and since the journey takes place on one road that spans from The Shire all the way to Mordor, it's easy to follow Bilbo's progress by flipping periodically to the map and comparing how far the Ford is from Rivendell, and so on.

THE UNNAMEABLES map is cool because it's an island, so the map can encompass the complete world that the characters live on, giving a feel for the scale of the story.

THE LAST OLYMPIAN is an interesting one because its story takes place in the real world, in New York City. In the book the characters have an all-out Greek battle in Central Park and the Empire State Building.

Thankfully for those of us who aren't familiar with the layout of NYC, there is a map to help. The author could easily assume everyone knows New York, but I would have been a little lost in some of the scenes without the map. One scene involves blocking all entrances into New York from monsters, and it was helpful to know that there are eight bridges leading into the city, all of which must be guarded against minotaurs, hell hounds, etc. The little drawings of sea serpents in the Hudson River were cool too.

Oh, and compass roses should be on all maps. And lastly, I think a map of Hogwarts castle, grounds, and surrounding areas should be included in all future editions of the Harry Potter books.

Examine the Map. It will show most of a continent (and sometimes part of another) with a large number of BAYS, OFFSHORE ISLANDS, an INLAND SEA or so and a sprinkle of TOWNS. There will be scribbly snakes that are probably RIVERS, and names made of CAPITAL LETTERS in curved lines that are not quite upside down. By bending your neck sideways you will be able to see that they say things like "Ca'ea Purt'wydyn" and "Om Ce'falos." These may be the names of COUNTRIES, but since most of the Map is bare it is hard to tell.

These empty inland parts will be sporadically peppered with little molehills, invitingly labelled "Megamort Hills," "Death Mountains," "Hurt Range," and such, with a whole line of molehills near the top called "Great Northern Barrier." Above this will be various warnings of danger. The rest of the Map's space will be sparingly devoted to little tiny feathers called "Wretched Wood" and "Forest of Doom," except for one space that appears to be growing minute hairs. This will be tersely labelled "Marshes."

That is mostly it.

No, wait. If you are lucky, the Map will carry an arrow or compass-heading somewhere in the bit labelled "Outer Ocean" and this will show you which way up to hold it. But you will look in vain for INNS, reststops, or VILLAGES, or even ROADS. No--wait another minute--on closer examination, you will find the empty interior crossed by a few bird tracks. If you peer at these you will see they are (somewhere) labelled "Old Trade Road--Disused" and "Imperial Way--Mostly Long Gone." Some of these routes appear to lead (or have led) to small edifices enticingly titled "Ruin," "Tower of Sorcery," or "Dark Citadel," but there is no scale of miles and no way of telling how long you might take on the way to see these places.

In short, the Map is useless, but you are advised to keep consulting it, because it is the only one you will get. And, be warned, if you take this Tour, you are going to have to visit every single place on this Map, whether it is marked or not. This is a Rule.

Posted by Ellen Booraem at 4:31 PM