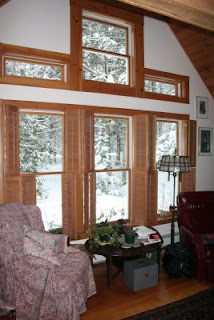 It's snowing again, after two or three days of cold so mean I began to think of it as a person. Fortunately there was and is no wind to make the cold truly unbearable or (so far, knock on wood) to blow any snowy trees down on the power lines.

One of the wonderful things about camping out in the addition/guest room is the wall of windows. I kept all but the middle window shuttered during the deep freeze, but now everything's open and snowy and lovely.

Rob, however, is cleaning off the driveway with the snowscoop. He doesn't think it's lovely at all. The temperature's gone up, so the snow's heavier than the light, fluffy stuff we had last week. I feel extremely guilty about my incapacitated knee, he'll be pleased to hear.

Last night we went to the Blue Hill Town Hall for an excellent production of "On Golden Pond," put on by New Surry Theatre and starring several of our neighbors. Here's a link to The Ellsworth American web site with photos of the show. The kid playing Billy Ray Jr (with the headband) is Nolan Ellsworth, who's been in my writers group at the school for three years. Or is it four? Anyway, he's in the eighth grade, so this is his last year. I think I wrote about him before without naming him--he's the one who wrote from the perspective of a cartoon character who wondered about the intended use of the anvils that kept falling on him. He's got an amazing sense of humor, he's a good writer and now it turns out he's a good actor, too.

Our neighbor Judy Wick played Edith Thayer, and Nolan's dad, Jon, played Bill Ray Sr. We'd just seen the play performed by equity actors last fall at Penobscot Theatre Company in Bangor (second year in a row poor old NST has had its thunder stolen like that--not PTC's fault, of course) but this local production more than held its own. The set alone was a marvel, and it was designed and painted by Annie Poole, who also plays Chelsea.

I get jealous when people are so good at more than one thing. I try to hide it, though.

Cheering me up is the fact that Literate Lives thinks The Unnameables is...well, I guess, literate. And The Horn Book featured my book in its newsletter!

Posted by Ellen Booraem at 1:45 PM

Thanks for reading Literate Lives! I hope I was able to convey that The Unnameables is a little more than just "literate" I loved the book and can't wait to use it in a book group of kids and parents. Thanks for writing wonderful kids lit!