We got our first killing frost last night at Castle Ne'er-do-well, so it's definitely time to hunker down. If you're already sick of the blip-bleet-blip of video games, try this one on your reluctant reader. Or grab it yourself for a laugh.

Don't forget to click on the button above for more great entries in the Book Review Club!

The Wimpy Kid series spawned a movie last spring that’s out on DVD now, but that’s not why I chose it for this month’s review book. I chose it because of Arthur (not his real name).

A student at our local elementary school, Arthur’s an imaginative, potentially talented kid who doesn’t like to read—not the first I’ve run into, I’m sorry to say. In Arthur’s case, the chief competition is video games, surprise, surprise. He and I worked together on a short story last year, and I tried like hell to get him to read a book that was kind of the same genre as the story he was writing. He politely took the book home and just as politely ignored it. He told me he’d never read a book outside of school. Not once.

This year, he said he’d like to write something funny. So we went to the library and found DIARY OF A WIMPY KID, the first book of what will be a five-book series as of November 9. I got my hands on a copy of my own, and we agreed we’d read a chapter a week and discuss it briefly when we met. 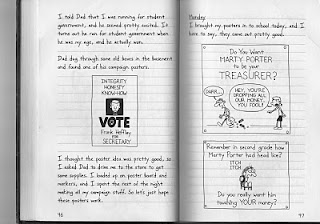 Last week, he announced that he’d finished the book ahead of schedule and wanted to start the second. He’d gotten bored on a Saturday and picked it up, he said, and all of a sudden he’d finished it. He suggested he might finish the second one by the time he saw me today. He’s not a fan of the movie.

Author Jeff Kinney was at the Boston Book Festival a couple of weekends ago, which I attended. I went to another panel instead of his, but now I wish I’d sought him out and kissed his feet. It’s not for nothing that this book has a “Maine Student Book Award Winner” sticker on the front—that award is voted by Maine school kids, and this is obviously a kid-friendly book.

I mean, just look at it. The typeface is fun but readable, and the cartoons are hysterical. I often managed to read through a scene without inhaling my hot beverage, only to choke half to death when I saw the drawing that accompanied the action.

This first book is the sad tale of narrator Greg Heffley’s first year in middle school, which he describes as “the dumbest idea ever invented. You got kids like me who haven’t hit their growth spurt yet mixed in with these gorillas who need to shave twice a day.”

In middle school, someone like Greg is acted upon more than acting. Parents, older brother, teachers, bigger or more popular kids—they’re the ones with the power. We share Greg’s abortive attempts to control his own destiny, whether by running for class treasurer (in a smear campaign involving head lice) or by joining the safety patrol in order to get hot chocolate and miss some pre-algebra.

The great thing about his odyssey is that Kinney allows us to see where Greg’s going wrong without one single word of preachiness.

At one point, Greg allows his dopey best friend Rowley to take the fall when one Mrs. Irvine reports a Safety Patrol member terrorizing the kindergarteners in his charge. He admits to Rowley that he was the culprit, having borrowed Rowley’s coat.

“Then I told him there were lessons we could both learn from this. I told him I learned to be more careful about what I do in front of Mrs. Irvine’s house, and that he learned a valuable lesson, too, which is this: Be careful about who you lend your coat to.”

To Greg’s indignation, Rowley turns him in. He loses Rowley’s friendship for a while, eventually gaining it back. We know he’s being punished for being evil, but Greg never admits to the connection. He’s a modern-day Tom Sawyer.

What a wonderful story! Lucky Arthur to have you. I love your interpretation of the series.

You two might also enjoy sharing Big Nate by Maine’s own Lincoln Peirce, the latest one is in graphic novel form. For more advanced fare try The Diary of a Part Time Indian by Sherman Alexie.

And, sure enough, I went in today and he'd finished the second book. We took out the third.

Ooo...I'll try Big Nate. Thanks. And maybe work our way up the the Alexie one.

My daughter, a somewhat reluctant reader, loved this series. Now, we're onto Dork Diaries. But it's definitely more for girls. As usual, love your review, Ellen! (I've thought about setting my current ms in Maine, just so that I have an excuse to meet you!)

Any time, Barrie! We have a nice big guest room with your name on it.

My David loves this series, and it's very popular in his class.

"Arthur" took out book three the day I posted this, and one week later had read it AND book four. Book five was out of the library, so he took out another book that seemed similar.

This is nothing short of a miracle.