Yes, yes, it's been weeks since I blogged. There was this manuscript, see, and this stuff and that stuff. The manuscript has now returned in copy-edited form for me to read through again in a hurry and yet I am blogging, which makes me a saint.

Also, the power's been out for three days. Also, I am bereaved. Twice.

Thursday night, which featured winds in the 80 mph range, dropped trees all over the Blue Hill Peninsula, including on my now-probably-totaled 2002 Subaru Impreza. 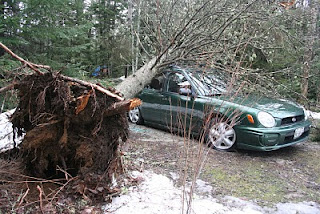 I was happy to see the tree go, frankly, since it was one of the scraggly, sun-blocking ones that we wanted to cut down anyway. I objected only to its sense of direction. The damage doesn't look that bad in the photo, but the frame's badly bent and it's such an old car that I doubt the insurance company will want to repair it. Also, I'm not sure the frame isn't thoroughly compromised.

Speaking of sainthood, my car sacrificed itself that Rob's might live. His car was parked next to mine, and didn't get a scratch on it. Last night, our friend John Wilkinson commemorated the occasion with this cardboard tribute to automotive unselfishness. 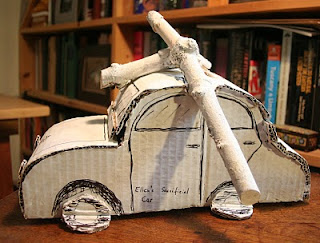 Far worse, however, is the loss of Delilah's head.

When we were first clearing this land for our house, Rob cut down a key couple of trees and opened up a vista that looked to us like a cathedral of spruces. We made sure we sited windows in the house so we could admire the view. After we'd lived here a while the cathedral's two spires (photo below left) became known to us as Samson and Delilah, names that seemed even more appropriate when a northeast gale gave Samson a haircut. (His pointy top fell off but grew back even bushier--he's the one on the left. Delilah apparently had broken off once earlier in her life, and had become appropriately two-faced.) 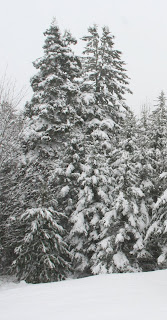 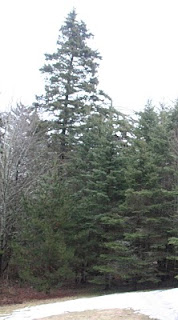 We were up all night during the storm--Rob got called out as a firefighter and couldn't get in to town because the road was blocked, so he was going to drive around this side of the blockage all by himself checking for downed wires. I didn't like the idea of him running around alone when the world was coming to an end, so I went with him.

As a result, we were beat and bleary-eyed when Friday dawned and we got our first glimpse of the new Delilah, cut off at the tree line (photo at right.)

Instead of looking like a cathedral, the woods now look like they're flipping us the bird. Which they probably are.

Posted by Ellen Booraem at 3:43 PM