We interrupt this steady stream of Ghana information (heh--just kidding) for this month's book review. Don't forget to click the icon above for more reviews! Coming up next: Ghanaian children. 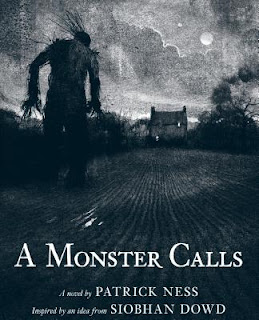 I can’t remember the last time I cried actual, dripping tears at the end of a book.

The last time before A MONSTER CALLS, I mean.

I am rapidly becoming a sniveling, snorting Patrick Ness fan-girl. (Maybe that should be “fan-granny.”) When I gushed about his Chaos Walking series a while ago, I noted what I thought were some flaws with the third book in the trilogy. This latest book, in my opinion, is perfect, and I don’t use that word lightly. It’s shortlisted for the Carnegie Medal in England and I so desperately want it to win.

Ness says on the cover that the book was “inspired by an idea from Siobhan Dowd,” the celebrated author of BOG CHILD and THE LONDON EYE MYSTERY, among others. Dowd had just started this book when she died of breast cancer in 2007. “I felt—and feel—as if I’ve been handed a baton,” Ness wrote in his preface, “like a particularly fine writer has given me her story and said, ‘Go. Run with it. Make trouble.’”

Did he ever. I’m not sure I can even express what it is that he accomplished.

Here’s the premise: In a British village, thirteen-year-old Conor is trying to hold his life together while his mother fights cancer. His father has moved to the U.S. with his new family. His mother’s mother periodically shows up to help, but she and Conor don’t see eye to eye. At school, Conor is either bullied or being coddled because of his mother’s illness, and he prefers the bullying. He is lashing out even at his best friend, Lily, the person who told everyone about his plight in the first place.

He has a recurring nightmare of wind and screaming and someone’s hands slipping out of his grasp. One midnight, he’s awakened from this dream by a house-sized monster who looks suspiciously like the yew tree in the back yard. The monster identifies himself as Hern or the Green Man or, in short, “this wild earth.” He intends to tell Conor three stories, after which “you will tell me a fourth, and it will be the truth.”

The stories—and the harrowing experiences of Conor’s daily life as his mother’s condition nosedives—are entertaining, excoriating, draining, and wildly fulfilling. We are right with Conor as he seeks out and confronts the truth of his feelings about his mother and his life. When he finds it and acts on it … well, I was a mess.

This is the single most effective celebration of humanity, death, and loss that I have ever read. And I do mean to link “celebration” and “death.” It’s not morbid or preachy or any of the other bad things it could have been in less insightful hands. It’s a portrait of us and our weird, pointless, gorgeous existence.

I’m making A MONSTER CALLS sound like JONATHAN LIVINGSTON SEAGULL, and I don’t mean to. This is a good yarn, a page-turner with real living characters and weird stuff happening. The monster is absolutely not Yoda. But also the book sings.

The cover and illustrations by Jim Kay beautifully evoke what’s going on in the story. They go right to the heart of things, but good luck trying to describe them.

God, I hope this book wins the Carnegie.

Posted by Ellen Booraem at 9:47 AM

Great review, Ellen. Sounds like a powerful and awesome story (and I mean that in the original sense of the word).

Ellen, after that review I will certainly read it. I'm on a harrowing book trip, it seems, having just finished The Book Thief.

I've heard such good things about this book. The story behind it is especially moving.

This'll be less of a commitment than the Book Thief--shorter and more jewel-like.

I will definitely read this book. Why? 1. You recommended it. 2. I loved Bog Child and the London Eye. Loved them. Thanks for reviewing, Ellen. I'll be back to read your trip stuff.

I'm rapidly building a long summer reading list. This one is at the top of it for now.

I enjoyed reading your account of Ghana. What lovely and lively people your new friends are! I've thought about taking a voluntourist approach to vacationing, and your post has encouraged me to look more into it. Thanks!

I highly recommend both Ghana and DiVOG (in case it's not obvious). But anywhere you go, volunteering is a marvelous way to feel you're getting to know a place, although of course one week isn't nearly enough. GlobeAware sponsors programs all over the world.