Ship That Baby Out! 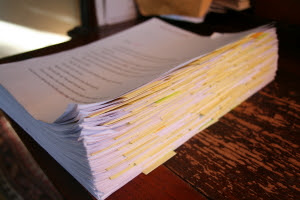 After two weeks of dithering, I just Fedexed my copy-edited manuscript to Harcourt in New York. That's it on the left there, 270 pages of it--the yellow post-it notes are the changes, mostly responses to style questions. I have style issues up the ying-yang because my setting is an island settled 300 years ago, whose inhabitants have renamed plants, animals, and themselves according to function. And modern Islanders still lapse into archaic English. That'll teach me.

So, should the Island name for rockweed be Cropfodder or cropfodder? Does the wood of the Sap Tree have to be Sap Tree Wood, or can we shorten it to Sapwood? Should unspoken quotations from The Book be italicized and in quotation marks, or just italicized? How about words-used-as-words (e.g. "The word of the hour is 'blabber.'")--should they be italic or just in quotes?

Oh, and would some Mainland trader have told an Islander about sweaters for the first time in 1900?

There were only a few content questions like that one (and the sailboat issue I mentioned in my last post). Some of the answers were in my head but some meant I got to revisit a few research sources--such as the Old Sturbridge Village site to find out exactly what the grist mill and sawmill should look like (for the map, I guess).

And just today the Oxford English Dictionary reminded me that "dost" is second-person singular and I twice had it first-person singular. And despite what you may hear on TV, the -eth ending on a verb ("he stinketh") is third person only.

I think I need to get out more.

I also got to check out a brand new library book, which the local librarian discovered and lusted after when I asked for help with the sweater question. It's No Idle Hands: The Social History of American Knitting and it shows pretty conclusively that Americans didn't know about sweaters until the late 1800s.

Posted by Ellen Booraem at 2:42 PM

Did you think his parents called him "Man"?

Why, yes, yes I did.
*looks crosseyed at Martje*

Wow, that looks like a pile of work, that manuscript! Congratulations!!!

First name The, last name Man. What's so strange about that?

Methinks you've spent too much time on Island. :P

Doesn't it feel good to get those copy-edits done and out of the house?!

I have to say, Ellen, I got a kick out of all the decisions you had to make. :)

Does it make me a writing nerd because I found it absolutely fascinating to read about somebody else's copy edits? It's so cool the stuff that your copy editor picked up on. I thought I knew my grammar, but I never would have known many of those things. Must feel good to have that all taken care of now. And I have to admit, I liked the picture, too. It looks so official somehow.