Life is good. Harcourt (meaning Kathy Dawson, genius editor) has decided to buy The Filioli, although I suspect that'll be the official name for about five more days, tops. (The Filioli are fairies, essentially, and Kathy's suggesting that we might want to be calling a spade a spade.) Lots of revision ahead, good times to be had by all. The deal was finalized yesterday by Kate Schafer Testerman, shoe-crazed agent extraordinaire. 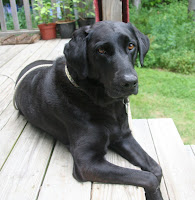 In other news, you can teach an old dog new tricks. Callie (short for Calamity Jane) is our seven-year-old black lab and a real sweetheart when she's not being a pain in the prat. She has an admirable grasp of the basic commands, and is very good about them when on the leash or in the house. Outdoors, she is very good until an eighth of a nanosecond after she catches a whiff of something interesting, at which point all other senses shut down and we lose her to the wild until she feels like coming back.

Two springs in a row, her nose led her to baby porcupines who were too dumb to get out of her way. Plus, she has a bad leg that hobbles her after she's been running around like an idiot. So we walk her on a leash right now--in the Maine woods! How dumb is that? So my goal (Rob thinks I'm the idiot) is to solidify her training so that we can keep control of her without a leash in the woods. Hey, without our dreams we are nothing.

Earlier this week I took her to an obedience class called "Building Distraction Muscle"--five students, all of us hoping to keep our dogs' attention when the world beckons. It's in Brooksville (two towns over) at the community center, which used to be a school building in the first part of the last century. Lovely big room with lovely big echoes when your sweetheart of a black lab insults the nice airedale and refuses to shut up.

Anyway, here's the first thing that worked: Lane, the trainer, let Callie sniff the wonderful smelly food she had in her hand, then Lane and I told Callie to stay and crossed the room to stand six or seven feet apart. I called Callie, and instead of coming to me she made a beeline for Lane and her enticing food. Lane sidled over to me, Callie followed, and when she was standing next to me Lane gave her the food. Then we tried it again, and to my astonishment Callie came directly to me, figuring that was a shortcut to the good times. Impressive.

We have three more lessons, and I'm working with her a little every night. We'll see.
Posted by Ellen Booraem at 4:36 PM

Are you smelling of dog food now? :)

Perhaps it'll be easier in the woods if you always carry a porcupine with you? Just to attract Callie, you know. *tries to keep a straight face*

Congrats on the Filioli deal!

Ellen!! I'm basically offline for the day as we're headed to the Fair, but I had to stop by to say CONGRATULATIONS ON THE NEW BOOK DEAL!!!

Ellen, I'm so happy for you and your successes. (with the 08 book and with the new baby on the way.) Way to go!! I'll watch for your book in our bookstores and good luck with the dog - who looks wise and wonderful - and I hope your knee gets better, oh and your trip looked exciting.

Woohoo, way to go girl! ( I mean about the fairy book, not that you smell like smelly food!)

Huge congrats on the sale, Ellen... and love your dog!
Teri

Hey Gabe! Great to hear from you! (Gabe's a former 2k8er who is now a 2k9er.) And thanks for the congratulations, everyone.

I'm happy to report that Callie is doing pretty well in doggie boot camp, considering her age and her owners' stupidity. She's a little overstimulated by all the food on offer, but the trainer has given us some nonfood methods as well, so that helps.