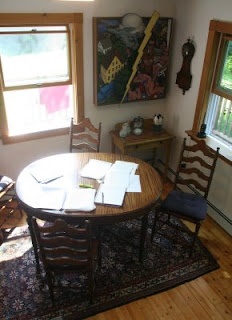 Now, why haven't I been blogging this time? First of all, and mostly, there was the Great Filioli Revision (left). I'm attempting to use a method recommended by Holly Lisle --my editor found it on line, and it's intriguing. You spread your manuscript out on the dining room table, fend off the cat, evaluate the manuscript scene by scene, drive the cat off AGAIN, and then ruthlessly delete any scene that doesn't pass a battery of tests. I haven't actually deleted much, which probably means I'm doing it wrong, but I've certainly found a lot that has to change. So that's good. (Incidentally, that's a Rob painting in the corner--one of the 3D ones he used to do. It's about Reagan-era Nicaragua.)

Excuse number two: Fourth of July, and the town barbecue run by the Youth Corps. (That's the tug-of-war through the fire department's spray curtain at right.) The food was delicious, but as usual we were certain of disaster an hour before the parade spilled into the town green at 10:30 a.m. Everybody always wants to eat immediately, even though they probably just had breakfast an hour ago. The kids did all the serving, but we had a ringer doing the actual barbecuing (Paul, the husband of one of our board members, who can cook for a crowd without breathing heavily), so all we had to do was organize, buy, worry, and take money.
And then there's the Electronics Purchasing Frenzy of 2008, plus the launch of my new web site, designed by my next door neighbor, the multi-talented and ever-patient Greg Summers. I have to say, the bio gives me the heebie-jeebies just the way this blog does--never have been comfortable with what an old cohort of mine used to call "the perpendicular pronoun." There probably will be other additions (an interactive map is a possibility), but for now it's ready for prime time.
Having priced business cards, post cards, stationery and the like, I decided it was time to buy an inkjet printer as a companion to the much-beloved b&w laserjet I plan to keep using for most things. After extensive research (yup, I'm a nerd) I got an Epson, resolving to use it as little as possible because the ink prices are INSANE. Might as well print with high-test gasoline. 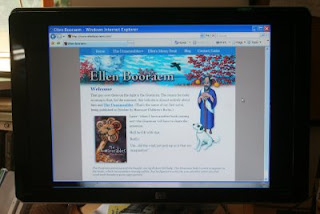 I also had promised myself I'd buy a flat-screen monitor (seen at left) when I sold another book. Plus, I just got a nice check from George W. Bush, and it was only patriotic to spend it. (Rob pointed out that both my printer and my monitor probably were manufactured overseas. Spoil sport.)
His point was made, however, when I took the monitor out of the box and discovered that I couldn't lower the "tail" to attach it to the base. I ended up calling HP tech support, and talking to several nice people in New Delhi. The first guy and I couldn't understand each other, and then he disconnected me. But the second techie, a woman, was very nice and put me on hold so she could run to the lab to try manhandling a similar monitor. Turns out you have to apply the kind of pressure everyone tells you never to do--I was sure I was about to snap something important. "Don't worry," the Indian lady kept murmuring, "if you break it we'll get you another one." I'm glad I was able to support the Indian economy, anyway.
Posted by Ellen Booraem at 11:07 AM

Great looking web site Ellen! I really enjoyed reading about the evolution of the Goatman. Can't wait for the book!

Thanks, Pepper! The book will be on the press right about now, I bet. Guess it's too late to worry about typos! *shivers*

I love the story of the courting postcards, how sweet! And then he turned into a mad axe murderer*.


*No, he didn't. Really, he didn't. Put down that quick quote quill right now, Miss Skeeter.

I won't tell him you used the word "sweet," Martje. Otherwise, watch out for that ax. *grin*

The new web site looks great, Ellen! I enjoyed reading about your messy desk and procrastination. We have a lot in common. (For instance, right now I should be upstairs getting ready to go out and run errands, and I'm sitting here enjoying your blog.)

I'm looking forward to your books!

It's still sweet, so there. :P

I waved at you on Friday evening, when flying over Maine on my way home from a conference in Washington (D.C.). Did ya see me? *g*