After all the promises, I've forgotten half of the funny and insightful things I was going to say about last weekend, when Gail Page and I trekked to Boston for the New England Independent Booksellers Association trade show.

It was a hoot. How's that for insight?

The major revelation from the experience is that I'm losing my marbles, among other possessions. When I pulled out of the driveway Thursday, I saw the telltale flash of solid object in the rearview mirror--oops, something just fell off the roof. Sure enough, there in the road was the little case containing eighty percent of the CDs I play in the car. I'd vaccuumed the car the day before, and put stuff on the roof in order to do that, see. I turned around and retrieved the CDs, but I couldn't help feeling jinxed.

That night, Gail and I went to the Children's Book dinner, a highlight of which was the fact that each and every one of us got a signed copy of the latest book by each of the three famous and amazing speakers (Laurie Halse Anderson, Jeanne Birdsall, and Norton Juster). I was extremely excited, so much so that I left all three of my new books on top of the machine where you paid the parking garage, never to be seen again.

Out to Sunday brunch with Larry, with whom I was staying, I ordered a ginormous meal that included a bagel and cream cheese, which I carefully wrapped in a napkin to eat on the drive home. And of course left that behind, too.

I guess I'm lucky I didn't run somebody over during that trip.

I signed books at the trade show for a half-hour Friday afternoon, which was fun and not nearly as humiliating as I'd feared. (Meaning, people did actually ask me to sign books, for which they'd actually paid $2. Each. Hey, at least they paid...)(Among then, however, were Gail and 2k8ers Nina Nelson and Donna Freitas, helping to make me look popular. I returned the favor when it was their turn. Not that they needed me to.) 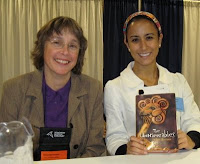 Here's a picture of me (left) at the signing table with Nadya Guerrero-Pezzano of the Houghton Mifflin Harcourt Marketing Department. Oh, and my book. Innit cute?

Saturday, Larry and I went to the annual field day at Quincy House, the Harvard residential house that Larry administers. Larry got to wear a striped referee shirt; otherwise, he would have had to compete with the staff team. 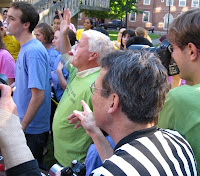 Events included a three-legged race, water balloon toss, balloon stomp, wheelbarrow race, tug of war, and the most bizarre pie-eating contest I'd ever seen. (The contestants plunged their faces into plates full of whipped cream to find pieces of bubble gum. The winner was the first to blow a bubble.)

Here's Larry pointing out to the multitude that House Master Lee Gehrke had a bubble going. Aren't they cute?
Posted by Ellen Booraem at 2:48 PM

Ellen, it's tough to leave a comment that adequately describes your "unnameable" talent. I'm 2/3 through your book and am delighted by it, a kudo I don't use lightly.
I might have feared that 20 years of small-town journalism would rot your brain. Instead, I find your imagination (again "delightfully") fermented, to all our benefit.
Warm congrats on publication eve.
Your old friend/employee, Stephany Boyd, St. Louis, MO

Thanks so much for getting in touch--I miss you, and YOUR brains and talent. Hope all's well with you.

Send me email so we can really catch up...the address is on my web site.