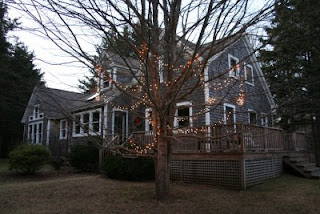 Well, we did it...got the lights up on the maple tree with a maxiumum of teamwork and minimum of unnecessary profanity. We used only the profanity that was absolutely necessary.

Rob's early Christmas present is that I've decided we won't have an indoor tree--at least, not a fir tree that we cut down and bring inside. I'll string some lights on the lemon tree inside the front door, which will appreciate the attention. We're postponing our annual New Year's pot luck until later in the winter, because just now I'm living in the dessert room. So it seems silly to have a tree just for the two of us, especially when one of us is an unrepentant Grinch. (Even if the other of us is Cindy-Lou Who.)

At the post office, mailing a package to other Cindy-Lous, I rediscovered the game of Telephone, small-town style.

The correct story: I had arthroscopic surgery to remove torn meniscus tissue and find out how bad the arthritis really is. I learned that I will have to have my knee replaced sooner than later. I'm doing just fine in the interim, although I retain whining rights.

The story I heard at the post office: I had my knee replaced at great trouble and expense, but the operation was botched and now I'm in torment.

I do love it when this stuff happens. Sometimes, I'm pretty sure I contribute to it myself. Anyway, I eagerly await the next embellishments.

*Sneaks up to attic, rummages around. Mutters to self, "Now, where did I put that horn? I had it just the other... ah, there it is."*

*Whispers: Samantha Clark interviewed me for her Day By Day Writer blog. And Greg Leitich Smith liked my book.*

In other pressing news, I've read some books lately that I loved, neither of them new to the world. One was Behind the Scenes at the Museum, by Kate Atkinson, which is one of the best books I've ever read. Hysterically funny, but with a compelling sense of history and the march of generations. Not sure when it first came out in England--the mid-90s, anyway--but it won the Whitbread whenever it was.

The other was Cordelia Underwood by Van Reid, a Maine native who lives in Edgecomb. This is the first of the Moosepath League books, and I'd wanted to read it and the others ever since I reviewed the latest one when I was newspapering. Reid originally published them as a serial in a local newspaper, just like Dickens, and they are Dickensian in form and spirit. They're set in Portland and Maine in the 1890s, and I can say with hand on heart that the first and fourth (fifth?) are delightful . Can't wait to read the others.

Off to drink wine with the neighbors, and re-toast Rob's birthday several weeks after the fact.
Posted by Ellen Booraem at 3:45 PM