Democracy in...Wait, Did Somebody Say "Action"?

I took my camera to Brooklin town meeting this morning, figuring I'd blog about this most basic exercise in democracy and small-town camaraderie. Before I'd even unpacked the camera, the exercise turned into an episode of "Survivor: Maine." 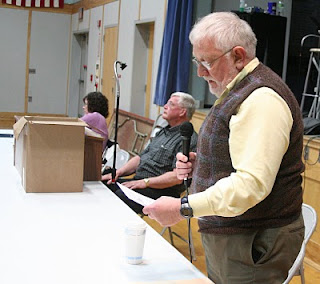 The meeting started at 9 a.m. By 9:05, all three selectmen had resigned and walked out of the school gymnasium. Then the tax collector resigned and sat down in the audience. (At right, the last selectman standing, Richard Freethey, reads his resignation letter. Our stalwart town meeting moderator, George Eaton, is pondering what the hell he's going to do next and Town Clerk Gigi Hardy is pretending she's someplace else entirely.)

I've been a close watcher of town politics in Maine for 25 years and I've never seen this happen before. As I write this, we don't have a clear idea of how much trouble we're in. At the very least, we can't pay our bills without selectmen to sign the warrant that authorizes the payment.

There may have been two or three people in the audience who saw this coming, but no more than that, I bet. Maybe we should have been more insightful, considering that at the town election polls yesterday voters were handed a bunch of letters from town officials criticizing each other. It seemed to be the selectmen vs. the elected town office staff, the town clerk, treasurer and tax collector.

We also received a written report from a committee appointed to study how the town office operates. The selectmen had appointed the committee last spring, part of its charge being to investigate the possibility of replacing the elected town office staff with an appointed administrative assistant. The elected staff didn't think much of this idea, and a low-pressure system settled on the town office that has stayed there until today.

As it turned out, the report did not recommend replacing anyone with anyone else, but instead suggested things everyone--especially the selectmen--could do to steamline operations. Apparently, this did nothing to improve the weather. By last week, when I was hanging out in the town office registering my new car, the gale warnings were up, I'm not exactly sure why or from whom or to whom. All I know is that the air was crackling.

The three resigning selectmen said, basically, that they were sick of being disrespected. Sounded like the letters handed out at the polls were the last straw.

Thanks to the stalwart George Eaton, we went through the town meeting anyway--passed town and school budget items, approved a veterans' memorial, set a few routine policies, honored a couple of firefighters for exemplary service. Some warrant articles had to be "passed over" because we needed an explanation from the absent selectmen. At the end of the meeting, the tax collector bowed to pressure and rescinded her resignation. The town clerk said she would call the secretary of state on Monday and find out what we do next. Most likely, the state will appoint some sort of babysitter to take care of us until we can elect new selectmen. 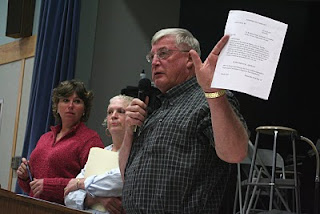 It was all very weird and--although no one would admit it out loud--very thrilling.

Usually, town meeting has the same atmosphere as an extended rainy spell after a drought--a great big bore, but we know it's necessary and we feel a sense of solidarity and accomplishment just going through it together.

This town meeting was more like northeast gale, which you thoroughly enjoy even as it drops a tree on your car. (I don't seem to be letting go of that, do I?) I felt bad about the selectmen and we all griped about how terrible it was, but in reality it was the most fun we'd had in ages. People went around in the breaks suggesting each other run for selectmen and saying no, no, not me, not in a million years. (A possible worthy exception might be Lori Gallo, above at left, who would make a crackerjack selectman. She might have said "maybe." She and the woman next to her, Lauren Allen , were on the committee that studied town office operations. )

And we did a lot of the regular town meeting things, such as: 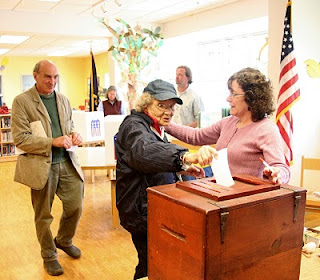 Voting by paper ballot for the school budget in the school library. We vote the individual line items by voice vote, but for inscrutable reasons the state insists that the final, comprehensive warrant article pass by paper ballot. We just write "yes" or "no" on a piece of paper and hand it in. Then, next Friday, we have to go to the polls and vote on it AGAIN. Inscrutable ain't the half of it.
That's former town clerk June Eaton voting in the photo at right. I bet she's glad Gigi's in the hot seat now, and not her.

Checking out the future. Below, Rob and several fellow curmudgeons examine the plans for a parking lot rehab (which was "passed over.") Rob and his fellow firefighters are in dress uniform, which he hates because he says it makes him feel like a Brown Shirt. The guy second from right is Ed Holden, who just got honored for 40 years of firefighting. In the photo below right, Fire Chief Sam Friend gives the Firefighter of the Year award to Scott Tierney, a relatively new firefighter who has been exceptionally active. (Another entertaining aspect of small town life: Years ago, Sam was a member of the elementary school Odyssey of the Mind team Rob coached. To this day, I have the power to embarrass Sam simply by saying the word "toga.") 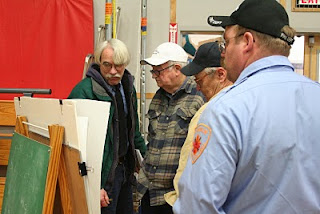 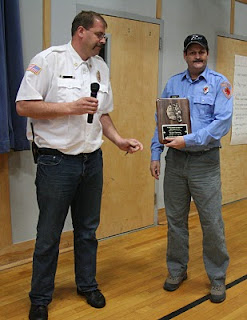 Eating. The eighth-grade class always serves lunch at town meeting to raise funds for its class trip. It's a tricky business, because once in a while the meeting ends early and the moderator has to beg everyone to stay for lunch. 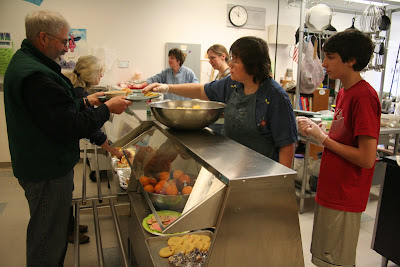 Today we finished all our business at the perfect time to eat, and then regathered in the gym to so that stalwart moderator George could exhort us all to "get with the program" and stop fighting with each other.

Posted by Ellen Booraem at 2:05 PM