Yes. Well. Another month, another set of blogging excuses. Turning over a new leaf I am, that I am, yup.

Speaking of leaves...after several years of hemming and hawing (and not sawing), we have finally committed mass-arbicide. The spruce trees around here are all dying a slow death, partly from age but also because the warmer winters aren't killing off fungi and other pests the way they used to. After the Death of the Green Monster, we revisited our concerns about the two clusters of spruces on the two north corners of the house. Actually, we were less concerned about them falling--a hazard mainly to shingles and windows--and more concerned about them catching fire if the weather got dry (a hazard to pretty much everything).

And so it was that the talented Jon Ellsworth came by with chainsaw and orange wedges, and showed us how it's done. I lost count of how many trees he cut down--fifteen or sixteen, anyway--and all but one of them fell precisely where he intended. The one that got away had been half broken off in the Green Monster Death Storm, and therefore was weighted funny. And even it fell almost where intended.

Here's the before and after: 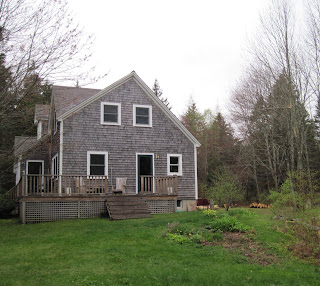 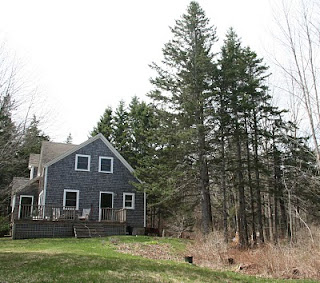 Sad, huh? On the more positive side, the garden in the back thinks it's achieved sunshine nirvana.

Having sweated through many tree-cutting adventures on our own, Rob and I were fascinated to see how precision logging works--especially on the trees closest to the house, which had disturbed even Jon's sleep the night before. (The process might not be quite so fascinating if you haven't come this close to offing your deck and smashing a kitchen window. Bear with me here, OK?)

First, the familiar: Jon (left) and Rob set up a safety rope with a come-along to coax the tree in the right direction in case of emergency. We've done this before on big trees, and it does relax the nerves. 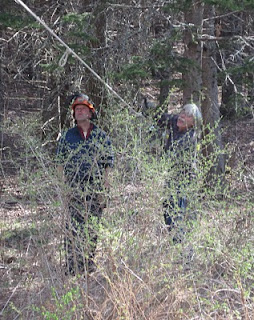 Jon makes the first cut, facing where he wants the tree to drop. I was taking this picture standing on the deck, to give you an idea of the stakes here. 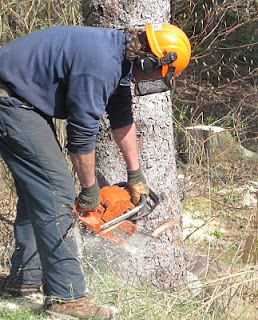 Then he makes another cut on the opposite side and hammers in wedges. Sometimes, hammering in the wedges was enough to force the tree over. 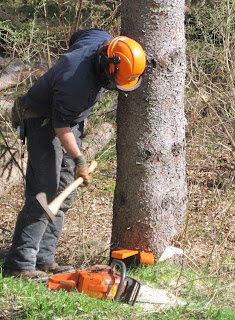 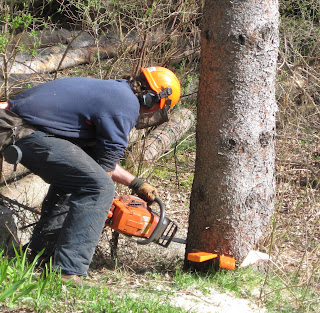 ... and, seconds later, TIMBERRRR--away from the house, and right between the garden and the baby pine we were hoping to save. (Which would have gotten flattened if we'd done this ourselves, I guarantee.) 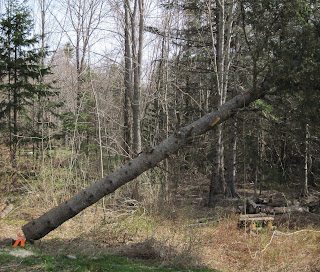 It was a pretty slick operation. Jon would drop a tree, the wade in and slice off all the branches. Rob and I would haul the brush out of the way on one side of the house while Jon got busy cutting down another tree on the other side. Jon was on hand for a total of six hours, which I think works out to dropping a tree every 22 minutes. You should see how long it takes us to do one on our own.

We are now the proud owners of many piles of logs and a brush pile the size of a school bus. Rob, being certifiable, has decided to use some of the logs to build an Adirondack shelter that will function as a tool shed. That meant peeling the bark off the logs, a chore we've managed to avoid in the 25 years since we abandoned our initial plan of moving to Maine and building a log cabin. (We were going to live in a tent while building. And may I just say... hah. Hah-hah. Hah-hah-hah. Thank you.)

Turns out if the tree is old and newly felled, peeling the bark is a piece of cake. (I speak as one who in childhood always peeled off chocolate frosting and ate it first.) Here's Rob at work: Starting the peel with a draw-knife at left, then peeling.

You will note that my participation in this phase was limited to taking pictures. I've learned something in 25 years. 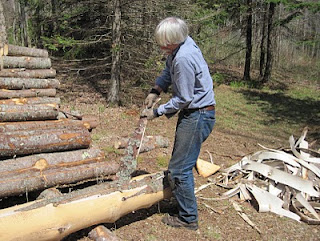 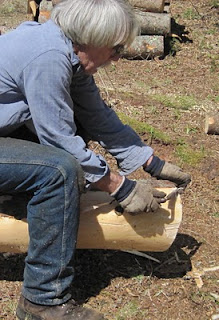 Posted by Ellen Booraem at 4:18 PM

I, personally, would go with psychotic, but to each his own.

P.s. my word verification thingie was sated, as in I am sated in looking at all that hard work YOU guys are doing. Perhaps not quite the proper use of the word, but it`s close enough for me! :P