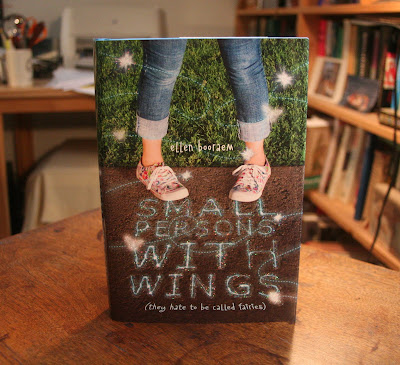 I got my first copy of SMALL PERSONS WITH WINGS this week, in a sumptuous package from my editor that also included chocolate. I have not been waving the chocolate around whenever anyone comes into the house. To be fair, I also haven't been eating the book.
In other news:
· It bucketed down rain and washed away the snow, then last night it snowed again, not enough to ski but enough to be pretty. Also enough to slick up the roads, so the morning neighborhood dog walk was conducted on a side road for fear that we would all slide out under the wheels of a fisherman. If the dogs only knew, they could buy their freedom just by taking off at a run when we're on an icy patch. But they never figure that out, which I guess is the secret to our long and friendly relationship.
· Our friend Lisa is here from Minnesota (she has a house in the neighborhood, usually inhabited only in summer), bringing with her a DVD of Toy Story 3, which Rob didn't see when the rest of us saw it last summer. My favorite part continues to be Mr. Tortilla Head. I am possibly influenced by the fact that, many, many years ago, I wrote an employee newsletter for Hasbro Toys, inventor of Mr. Potato Head, and I am the proud owner of two commemorative coasters, one devoted to Mr. PH and one to GI Joe. There was a rumor that Mr. PH was modeled after one of the brothers who founded the company, back when it made pencil cases. This rumor was hotly denied by all in authority, and yet it persisted. Much like Mr. Tortilla Head.
· As my frumious friend Bander noted in comments to the post below, the Kirkus review of SPWW is up online now. It's here .

Posted by Ellen Booraem at 3:08 PM

Yay! How very exciting! I can't wait until I have my copy! A beautiful cover for a fantastic book!