We're getting a bit of snow today. I am ecstatic, although skeptical that it will stay around for long. We may have eight inches or maybe even a foot by the time this ends. I clattered down cellar and dragged up my skis and poles, and have them chilling on the porch. (For non-skiing readers, warm skis turn the cold snow into an icy mound under your foot. It's a lot like those ancient Chinese platform shoes. And just about as easy to maneuver in. ) I plan to ski around the yard tonight (when I should be reading about ancient Celtic homelife, but who's watching?) to get my legs under me, and hope to head off into the woods tomorrow.


Here's what the house looked like after the first round of shoveling. (Probably more to come tomorrow morning, at which point maybe I'll be a little less enthusiastic.) 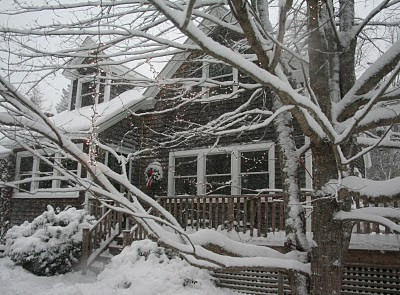 You will note that I got the lights up on the maple tree without the drama of procrastination and near death I went through last year.

And here are my skis. Thoroughly chilled. Waiting. *Looks furtively around for ancient Celts.* Guess I'll head out now. 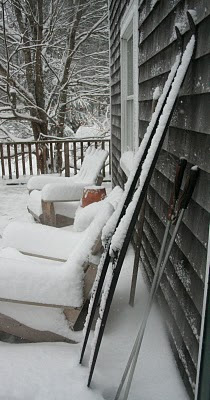 P.S. I suppose I should mention that Publishers Weekly gave SMALL PERSONS WITH WINGS a starred review. (Not sure the link will work, so I'll just say the reviewer called SPWW "wistful, humorous, and clever.") And we just heard that Kirkus Reviews did, too, although I don't think the review will be up on the web until the 15th. Yay team!
Posted by Ellen Booraem at 3:40 PM

The Kirkus review is up:
http://www.kirkusreviews.com/book-reviews/childrens-books/ellen-booraem/small-persons-wings/

Congratulations on the star!

And KZ, I went back to reading after a couple of attempts at skiing. The ground wasn't frozen enough under the snow, so I kept being ambushed by slush.