No Fireworks This Year. Sorry, Channel 2.

I met my friend Anita at The Morning Moon cafe for breakfast Sunday morning, the day after Brooklin's annual town meeting. Owner Mike Roy, a selectman, emerged from the kitchen to say, "Jeez, they were throwing money at you."

Hard to know what to expect of a town meeting. Sometimes the voters question every minute expenditure, other times they worry that you're going to waste away for lack of funding. That was the case this year for the Brooklin Youth Corps, the town's summertime work/self-esteem program for teens.

In most respects, town meeting was blissfully boring, especially considering what happened last year. The first weekend in April, we vote for town officers on Friday, then gather at 9 a.m. Saturday in the school gym to vote the budget for the fiscal year that starts in July. Last year, after months of bickering in the town office, all three selectmen resigned and walked out two minutes into the meeting, leaving the moderator, George Eaton, to lead us in figuring out what to do next. 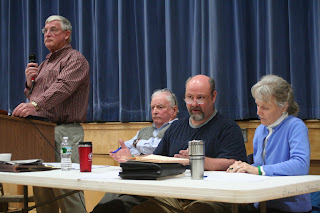 George talked a couple of the departing selectmen into remaining in office to sign things until we could hold a special election. Then we elected him, former selectmen Albee Smith and Mike Roy to one-, two- and three-year terms. On Saturday, George stepped down as selectman (to hearty applause) and went back to being town meeting moderator. We elected Deborah Brewster, a former school board chairman well versed in town politics, to a three-year term in his place.
Phew.
In the photo at left, Mike explains how we fund the maintenance on the fish pier and town landings. That's George on the left, then Albee, Mike, and Deborah. (I think Albee's deep in thought rather than grumpy.)

One of the Bangor tv stations sent a reporter to this year's meeting, obviously thinking we were some fractious town that would always generate news. Poor guy damn near fell asleep. We chatted in an unfocused and friendly way for the most part, flaring up just a teeny bit as we discussed whether we should give money to a lobster research and replenishment project that may not take place. (That's a representative of the organization at right, promising to not to take the money if the project dies.) We were out of there by 11:30, although most of us stuck around for a lunch raising funds for the eighth grade class trip. (Pictured below) 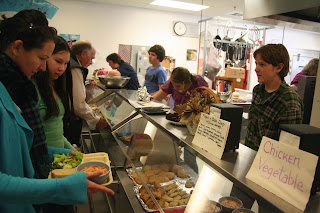 Re: the money-throwing incident. Financially, the Brooklin Youth Corps--the town's summer paid work/self-esteem program for teens--did well last summer. We got several grants, the weather was perfect for our garden project and the kids got to sell some of the produce at a farmers market. As a result, we needed to ask for $4,500 at most from the town (we also get money from donations, fundraising events, and homeowners for whom the kids do chores). Then we discovered we were likely to have only eight or so kids, so we'd only need one coordinator/van combo rather than two. We promised the selectmen we'd shave our request accordingly.
So Saturday morning, as BYC president, I stood up thinking I was heaven's gift to town politics and said we'd reduce our request to $500.
You would have thought I was offering to immolate myself. It was a worrisome thing, somebody asking for practically no money, and there was a splinter movement to keep us at $4,500. Others thought we knew what we were doing (not a good assumption) and should be permitted to starve if we wanted. We compromised on $1,500.
And now, being me, I'm worried that we've overlooked some gruesome thing and really needed our $4,500.

Town Clerk Gigi Hardy (right) yuks it up with Tad Goodale during the legally-required paper ballot vote on the school budget. Pain in the neck, but a good chance to stretch our legs. They're in the school library, which explains the dragons in the background. 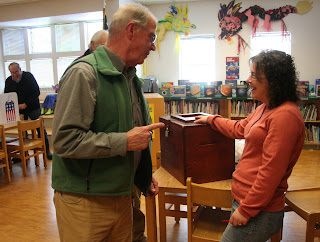 Rob, having accepted the surprise Firefighter of the Year award from Fire Chief Sam Friend, attempts to escape without having his picture taken. It was actually pretty sweet--Rob coached Sam's elementary school Odyssey of the Mind team, so they go way back. That's why Sam got a little emotional giving Rob the award. It's also why he's cracking up watching Rob do the Curmudgeon Shuffle. 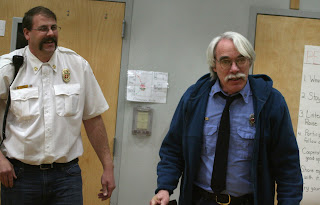 The Knitting Report: I'm still hunting for the right combination of sweater pattern and yarn, so to feed my addiction I've started making a hat from leftover wool. The color combination I've ended up with is either subtle and sophisticated or ugly as sin. I may abandon it and hunt for more leftovers in the attic.

The Writing Report: I'm revising. Connor's parents are giving me trouble. All my adult women seem to be either worry warts or nutcases. *sigh* The teen girls rock, though.

Have you looked on Ravelry for a sweater pattern?

I enjoyed reading about the town meeting. Your summer program sounds wonderful.