Our little town held an early harvest festival yesterday, complete with balloons, t-shirts, and a food fairy who made us all eat celery. The festival, called Brooklin Eats, was the work of a "friends and neighbors" group whose other projects include affordable housing and public walking trails. Most of the vendors were farmers from Brooklin and neighboring towns, most of the produce organic.

The town band, a collection of khaki-clad music enthusiasts who chiefly play on the Fourth of July, must have been spending the rainy days practicing like mad--it sounded great, lots of oompa-laden town-band-type tunes. 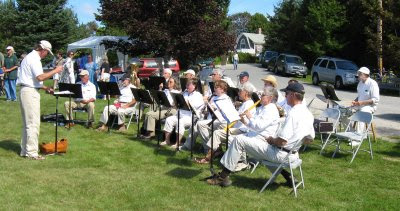 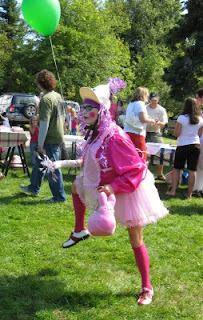 At right is the food fairy (aka Beth Gorski) rocking out to an oompa tune played by the town band. The little bunny bag she's holding had celery and carrot sticks in it. She was forceful about offering them to us all. 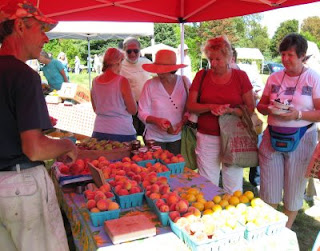 This is Tim Seabrook of Five Star Nursery and Orchard, selling organic peaches, pears and golden Japanese plums. He and his wife, Leslie (background, back to camera), sell raspberries earlier in the season and apples later on, as well as making cider. They're also artists, but manage to paint and make prints only in the winter because the rest of the year they're going nuts.

Tim and Leslie and Rob and I buy joint subscriptions to Penobscot Theatre Company in Bangor every year. Otherwise we'd never see each other. Also we'd become axe murderers in February without knowing we had a theater jaunt to look forward to. 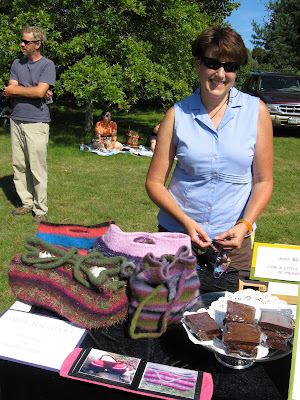 This is Michele Corbeil, who works at WoodenBoat Magazine but also is a world-class knitter and baker (notice the brownies, which could kill you but you'd die happy), as well as a pastel artist. 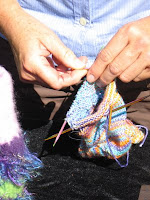 Last September, Michele and I and four other women spent a blissful week in the middle of Penobscot Bay on Bear Island (owned by Buckminster Fuller's family, which rents out selected houses) . I worked on The Filioli out there, writing by hand in a notebook as I haven't done for some 25 years. No electricity or running water, yet we lived like queens in an old farmhouse right on the water.

This year I can't go because everything book-related is at the wrong stage to go off the electric grid. Plus I'd have to leave mid-week to go to New England Booksellers in Boston. (Not complaining, mind you. ) Plus I've got a torn meniscus in my knee and can't walk. (I am complaining about that.)

Posted by Ellen Booraem at 7:39 AM

Hey Ellen (waving madly!), Thanks for the plug! You make me sound quite industrious!

So glad about your book success!