A Procedural Note for the Weather Gods

The dahlia tubers are safely inside now, so here's the plan. First, we need a hard frost so I can put the brush on the garden without feeling that I'm providing a haven for rodents and other itinerants. This is particularly important because my car glove compartment now is enhanced by a cake of Irish Spring deodorant soap, deterring (I hope) those rodents who had planned to spend the winter in my heating system.

Also, we need a hard frost because it's a pain shoveling snow when the ground is soft underneath.

Once the ground is firmly frozen, the gods have my permission to send snow. Lots of it, because this year I can ski. 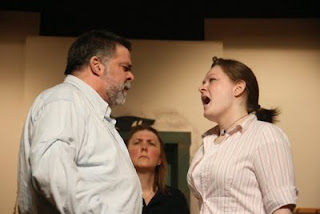 In other news: Rob and I went to New Surry Theatre in Blue Hill last night to see a workshop production of "Too Good To Be True," a one-act about a Maine family dealing with a mill closing, written by Rick Doyle of Bucksport. (That's Michael Reichgott, Shari Wick John, and Kittery Shy-Hermit hashing things out at right.) We were impressed, both by the play and by the acting. I sat in front of one of the women from the play-writing workshop I attended earlier this month, and we agreed that our perspective had been sharpened by our new-found (and fledgling) expertise. We both saw things that needed work...but not much.

Tomorrow on The Enchanted Inkpot, I'll be leading a book club discussion of The Wee Free Men by Terry Pratchett. Join us!

Posted by Ellen Booraem at 4:15 PM

I hope you have a very snowy winter so that you can do lots and lots of skiing!

From your lips to the weather gods' ears, Barrie!

And I hope you have enough rain to keep the fires out and not enough to cause mudslides.