ALA, or a Look Back in Time

During the mad rush to revision (more on that later), I've been taking advantage of the rare ski conditions by heading out into the woods just before dusk. Today I stood out there on my skis, listened to the silence, and thought, "At this moment, no one in the world knows exactly where I am." A comforting thought in this age of cell phones and twitter.

Last weekend, I was in the opposite situation, especially on Saturday when I joined many thousands of librarians--and those who sell things to them (including publishers)--at the American Library Association's midwinter meeting in Boston. The midwinter ALA meeting normally is a business meeting with little attraction for authors (except the awards hoopla at the end), but this year the authors started what amounted to a fringe festival. 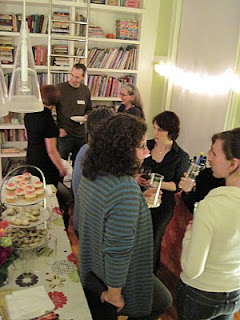 So it was that I mushed down last Friday, the 15th, to stay with my friend Larry and go to a dessert party at the Somerville apartment of Grace Lin, a fellow Inkie who was to become a Newbery Honor recipient three days later. (Woot!) That's the party at left. I got a photo of Grace but it didn't do her justice so I stole one of her author photos, taken by Alexandre Ferron.

The next day, I met my editor, Kathy Dawson, at ALA, which was at Boston's new convention center in South Boston, right down the MTA Orange Line from Cambridge. Kathy and I wandered around the publishers' booths a bit, I met some people at Penguin/Dial and Houghton Mifflin Harcourt who had been just names to me before, and I began indulging in the greedy insanity that is ARC-collecting. (Visitors leave book conventions looking like looters.) (ARC stands for Advance Review Copy--a paperback version of the hardcover.) Fortunately, having experienced this phenomenon at the New England Booksellers trade show, I brought two cloth bags with me. Also fortunately, I stopped once they were full, and declined give-away bags that would have fed the frenzy. (I feel extremely virtuous about this, although other loo...er, convention visitors clearly thought I was a wimp.) 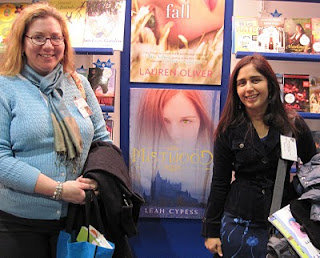 My other photos made everyone in them look like yetis, but Nandini had better success (as well as the sense to ask somebody else to take the group shots) so here's a link to hers. You'll see that she also took photos at the day's big author event, theKid-lit Tweet Up organized by Mitali Perkins and Deb Sloan. Several hundred kids' book authors, all of them with Twitter accounts, showed up to hobnob and connect names with faces. It was very, very entertaining and instructive. All hail Mitali and Deb.

I'm out of time and this post is getting too long. So I'll write about revision (argh!) tomorrow, when I'm not in the snowy woods pretending I don't exist.

P.S. I suppose I should mention that THE UNNAMEABLES made the ALA/YALSA's final Best Books for Young Adults list. I'm pumped, and they even gave my name a much-needed extra consonant.

Posted by Ellen Booraem at 5:45 PM

I'm glad I found your blog. I'm an Inkie wannabe. Thanks for the inspiration.