IMPORTANT NOTE TO READERS: If you are Dr. Garrett Martin, orthopedic surgeon, Bangor, Maine, this blog post will not interest you and you should not read it. There's probably a football game on. Go watch that instead.

IMPORTANT NOTE TO THE ENGLISH LANGUAGE: Thank you for including so many short, Anglo-Saxon words, which I found extremely useful today. Also the word "bugger." 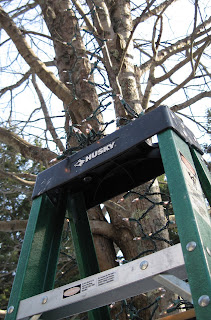 Turns out snow makes a stepladder a little tippier than usual.
I found this out today when I finally, FINALLY got the lights up on the maple tree out front. Because the tree is no longer the sprout it was when I first started doing this 16 years ago, the process now involves a stepladder, a long pole, and several implements that belonged to my mother after she'd had a hip replaced and couldn't bend over and for some reason wanted to dress herself. It also involves me climbing into the tree at one point.
So it was that, around noon today, I found myself up in the tree, geriatric implement in hand, one foot on the stepladder and one on a branch. I didn't realize that I was leaning against a relatively slim branch, which happened also to be a relatively dead one.
And so the slim branch broke, and the stepladder tipped, and I found myself hanging over another branch, staring at the ground a dozen feet below, about to topple. My last appointment with Dr. Martin flashed before my mind's eye: I asked if I could ski this winter, and he fixed me with A Look and said yes but he'd appreciate it very much if I didn't break the leg with the fake knee in it, the bones of which would remain weak for another 18 months. "That would be hard to fix," he said. "There's not much to work with there." 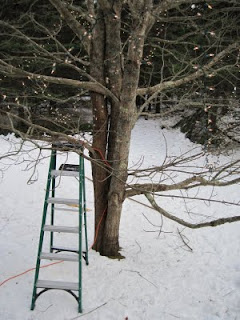 As I dangled, I reassured myself that I probably would fall head-first and break my neck rather than my leg, thus not involving Dr. Martin. This gave me strength, and I managed to feel around with my foot, find the halfway-tipped-over stepladder, right it, and achieve some semblance of solidity.

Otherwise, the operation went well and was over in a couple or three hours, although close to the end I did almost fall off the ladder with scissors in my hand. (SPECIAL NOTE TO READERS: If you are the ghost of my mother, creator of the world's longest list of Things You Don't Do with Scissors in Your Hand, perhaps you'd like to watch the game with Dr. Garrett Martin, orthopedic surgeon. I know you didn't think much of football, but you'd flirt with Dr. Martin.)

ATTENTION CHRISTMAS SHOPPERS: If you're wondering what to get your dog, the managment suggests giving her a solid undertaking that she will never be human and thus will never be called upon to manipulate strings of things. As stunt-dog Callie demonstrates below, dogs think we're nuts. (Click on the photo for the full facial expression.)

Posted by Ellen Booraem at 2:52 PM

Wahey! Well done for putting up the lights without breaking anything, except for the tree. :cheer:

Dumb Question: Why don't you leave the lights in there year round? Just unplug them. In summer they're hidden by the foliage anyway...

One reason is that the lights barely survive the winter, and probably would be in rough shape by the end of summer, so we'd have to replace them anyway. Also they're on the lower branches and wouldn't be hidden, and would be unsightly when not lighted. Also Rob's afraid they'd impede the tree or grow into the bark or ... I dunno, something bad. We try to take them off before the buds are too far advanced, because it's easy to knock them off.

"knock them off" meaning the buds, not the lights.