Why We Love the Humans

Today's the official birthday of SMALL PERSONS WITH WINGS. Here's what I got in the mail this week from bosom buddy and stealth copy-editor Shelly Perron in Connecticut. 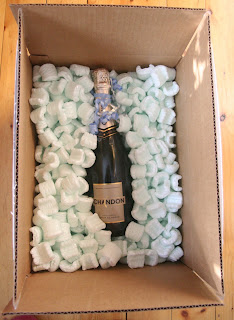 I will pop it this evening, possibly on the phone or Skype (!) with Shelly. (I figured out how to use my computer camera yesterday. Watch out, world.)

Since the Small Persons have been on the receiving end of various gifts for some years now, I thought I'd celebrate their print birthday by offering "The Parvi Pennati: A History in Presents."

The Parvi Pennati (a diminutive of "small persons with wings" in Latin) first glimpsed daylight on a private forum I've mentioned before, the Leaky Marauders. We originally got together as Harry Potter fans fond of debating whether Snape was secretly good and could Harry be Dumbledore's grandson. Before long, though, we were just friends who sometimes got silly. My sillier moments involved a ladylike, overdressed, clumsy, and ill-tempered fairy who once took a wild ride on a motorcycle with a hippogriff and a stuffed teddy bear.

Eventually, I got so fond of this fairy that I started writing a book about her. She is now Durindana, Mellie's overdressed and clumsy Parva friend.

Several years ago, Marauders from near and far gathered at Niagara Falls (sloooowly I turned...)--"near" meaning Montreal and Detroit, "far" meaning England and Japan. Martje and Ruth started things off by giving me this: 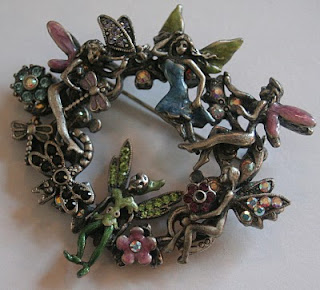 Meanwhile, KZ (Laura) had come prepared with an approximation of the fairy's favorite tiara. (We like to hang it casually on the coat-rack in the front hall. It looks especially at home in the summer with all the straw hats and baseball caps.) 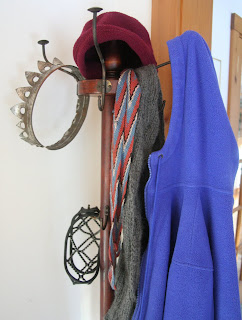 On our last evening, several of us were out gazing at the falls, which the authorities light up with colored lights. (They're tacky but marvelous except for the yellow, which makes you think there's an incontinent giant upstream.) Several others were visiting the souvenir shops. The falls-gazers were standing there snapping pictures when a cry rent the air and Di, an Australian who lives in Japan, hurtled on-scene looking for me.

Turns out the souvenir shop's wares included a fairy on a motorcycle. 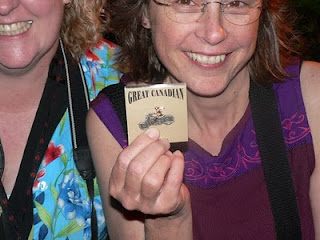 That's a portion of Di at left, along with a portion of me. (Can't remember which Marauder's Facebook page I cribbed this from, but thank you!) Only thing missing was the hippogriff.

Years later, when SMALL PERSONS was almost finished and I was reading it to my writers group here in Maine, fellow writer Susa Wuorinen demonstrated her many talents by creating this, a rendition of Mellie's first Parvus, Fidius. 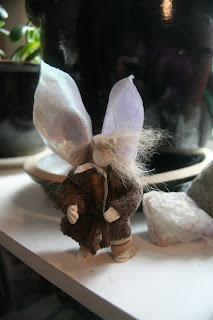 Susa writes kids books and plays, but she's also a topnotch illustrator and makes puppets. She's the one who made the marzipan fairies in the post below. I try not to be jealous.

Anyway, five years or so after the forum fairy first flitted, here' s her final home. 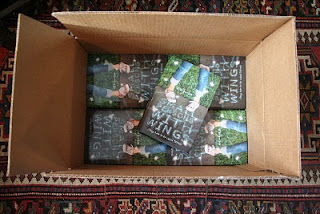 Many, many people have offered vast amounts of support to get her this far, chief among them superagent Kate Schafer Testerman and genius editor Kathy Dawson. Thank you all.
PS Oh my goodness, did I mention the great interview Dawn Metcalf did with me on The Enchanted Inkpot? I know I splashed it all over Facebook and Twitter. If you didn't see it there, hit it now. She asked interesting questions.

*haughty sniff* The tiara did have jewels on it before I crossed the border, you know. It was very opulent. *shrugs* The Canadian border guards must know powerful magic. :P

P.S. My word verification thingie is cryon, what is it trying to tell me?! :P

Ooo, that doesn't sound good, KZ. I'd rebel if I were you.

I just found your blog and I am so excited to read your book. Congratulations!

Next time I want you to work "Swing the Alphabet" into your post.

I had no idea all those years ago that your troublesome fairy would eventually lead to a book!