Dr. Seuss in Our Little Town

I got to read OH, THE PLACES YOU'LL GO to the Brooklin School this week, which was especially wonderful because that happens to be a Seuss book I'd never read. I found it a bit repetitive, frankly, and not as wildly inventive as, say, HORTON HEARS A WHO or my longtime favorite, GREEN EGGS AND HAM. And I had to keep inserting "or girl" every time he used the word "guy" in addressing the reader. But it's an inspiring and truthful book, no question, and the kids did laugh, so that's all to the good.

March 2 is Dr. Seuss's birthday, in case you didn't know, and the National Education Association chose it years ago as the date for Read Across America, when community members visit schools to read aloud. In Brooklin, as in many other schools, it's also Pajama Day. (I sleep in a T-shirt--TMI alert--and don't own pajamas, so I contented myself with wearing a bathrobe over my clothes.)

As you will see in the photo below, music teacher Mike Schrader also is pajama-challenged. He solved the problem by wearing a plastic bag on his head. He and the second grade led the school in singing "Dr. Seuss, We Love You," to a devilish tune that stayed in my head all day and drove me NUTS. (IMPORTANT SANITY TIP: When that happens, go here.) 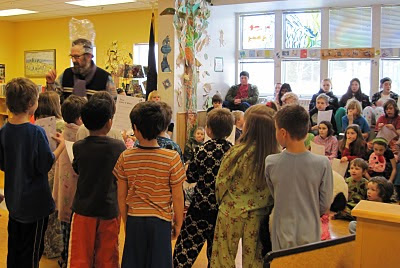 After the reading and the singing, a special guest appeared: none other than The Cat in the Hat, played by school staffer Cookie Mangels. She was the right choice for the job, never having met a kid or a dance move she doesn't love. 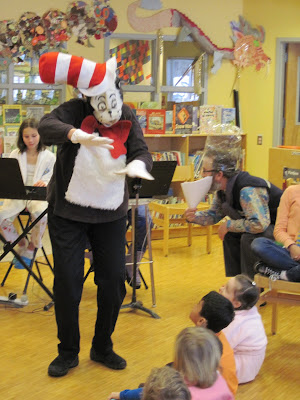 And then there was the cake, donated by Tradewinds Marketplace in Blue Hill. It was 8:30 a.m. so, wisely, no one cut into it. The kids would have it for dessert at lunchtime. 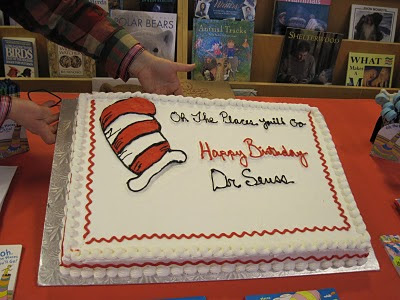 After the festivities, I went home and had a truly horrible writing day. Fortunately, true to the spirit of OH, THE PLACES YOU'LL GO, I then had a great day Thursday. Then a nothing day Friday and not much of a day today. So tomorrow will rock!

In other news: I signed up to do Skype author visits. I probably will die of fright the first time I do one. Very cool idea, though, especially for those of us who live miles from nowhere.

The knitting report: I seem to have hurt my arm skiing. I finally fell, in spectacular fashion, and had to thrash around in the snow for a while before I managed to stand up. Not sure when my right arm took a hit, but I decided I probably couldn't type AND knit. So, in a spirit of self-sacrifice and WANTING TO GET THIS FRIGGIN' DRAFT OVER AND DONE WITH, I've stopped knitting for a few days.

The writing report: Not even 25 pages left to go on this deeply ugly first draft of CONNOR'S BANSHEE (ETA: Maybe not even 10) and suddenly a minor character from mid-story has returned and wormed his way into my heart. He has absolutely no function at this point in the story. He might be the "darling" referenced in the old saw, "kill your darlings." Or not. One way or another, this'll be blood-curdling.

Posted by Ellen Booraem at 1:54 PM

Are ya gonna yank his head off?

Kzspot, whose word verification thingie is cones, which is really funny if you think about it.
http://www.youtube.com/watch?v=9vPfjHs32do&feature=related