Like everyone else, I'm glued to any internet reports I can find about the Fukushima Daiichi nuclear power plant in Japan. My friend Di (discoverer of the fairy-on-a-motorcycle pin) lives just north of Tokyo, and her Facebook updates have been calmness itself. Although her family, like everyone else, is being affected daily by power outages and transportation difficulties--not to mention aftershocks--she suffered only minor losses in the earthquake and was well out of range of the tsunami. Nevertheless, "nerve-wracking" is a vast understatement.

And of course the devastation in the tsunami areas is unbelievable. Add radiation to the mix, and you just want to rush over there and DO something.

YA author Maureen Johnson (also represented by my agent Kate Schafer Testerman) incited many of us to donate books for prizes in her efforts to raise funds for Shelterbox, a truly amazing organization that ships completely equipped shelters to disaster areas. That was great--her efforts raised some $14,000 for Japan and, earlier, $15,000 for Christchurch. (The Japanese number is smaller, I suspect, because of the whirlwind nature of the effort-- it was all over by Sunday morning.) But it feels profoundly unadequate, and I know we'll all be looking for other ways to help.

Johnson did all her fundraising on Twitter. Di keeps us posted on Facebook. Say what you will about social networks, at times like these they're worth their weight in megabytes.

Meanwhile, life goes on. It's town meeting season around here--ours is in a couple of weeks--and last week I got to cover Deer Isle's for The Ellsworth American. It was an uneventful year with nothing astounding on the warrant and the budget about the same. I loved it, though--even the most stultifying town meeting has that moment "when democracy sat up and looked around," as E.B. White wrote about a Brooklin town meeting years ago.

This time, citizens raised questions about recycling and building debris at the solid waste transfer station, support for the shellfish commission, and brush-clearing on the roads. A splinter group decided the town's long-time animal control officer needed a substantial raise to help with truck maintenance. The voters gave him another $100 a month even though he'd only asked for $15 or $20 more. He said he "doesn't do the job as good anymore" because he no longer cleans up roadkill. (The crows handle that nicely.) He does, however, keep stray dogs at his own house as much as he can. He's been looking for an apprentice, but "nobody loves animals like I do." 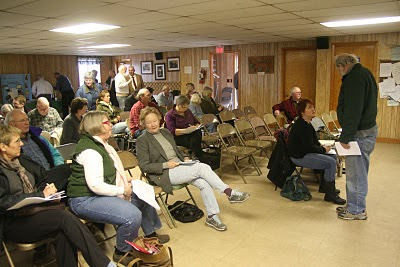 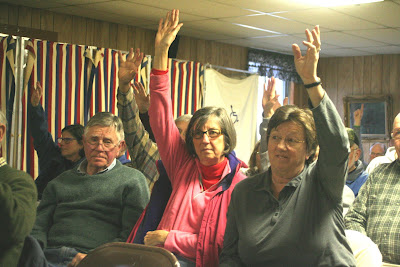 Voting. In this case, whether to consider holding future town meetings on Saturday rather than Monday afternoon. (Stonington, the other town on the same island, also meets Monday afternoon. They used to call off island schools on town meeting day, but I don't think they do that anymore. That's what happens when you build a bridge to the mainland.) (They built it in the 1930s. Still.) 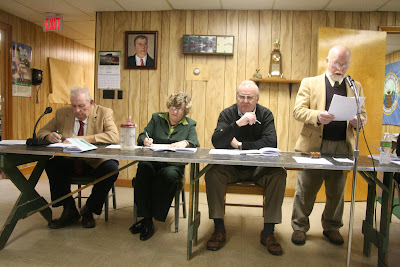 The Deer Isle selectmen (seated) and the town meeting moderator. The selectmen look grim here but they're really very nice. 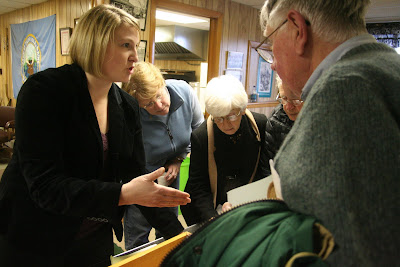 After the meeting, Town Clerk Rebekah Knowlton explains the ins and outs of the school board vote. Since Deer Isle and Stonington share a school system, both towns vote on the same school board candidates. This can get tricky, because Deer Isle is much bigger than Stonington and can swing the vote if it wants to. Generally, though, the two towns get along pretty well.
The Wildlife Report: This morning, the cat learned how to open the door to the Milkbone cupboard, and stood aside while the dog gorged herself. The cat keeps trying to ingratiate herself, but after four years of effort the dog still won't let her snuggle up.

The Knitting Report: I'm still on my first cotton sock. It looks very sloppy--cotton turns out to be less forgiving than wool--but I'm hoping It'll All Come Out in the Wash.
The Writing Report: I'm taking two weeks away from CONNOR'S BANSHEE to gain perspective. I thought I'd work on something else but I seem to have frittered one week away on chores. I did spend a day reading about Death. That was cheery.
Posted by Ellen Booraem at 10:12 AM

Just imagine what that cat could do if she had opposible thumbs.

She'd definitely be the boss of the house. (What else is new?)