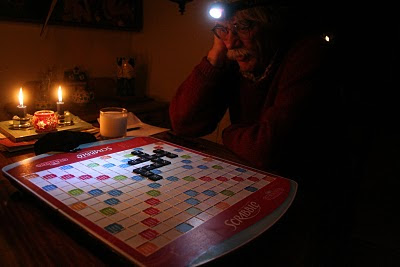 This may look like nothing more than a picture of a man making the best of a power outage, but in fact it's a psychic breakthrough. Possibly temporary, but a breakthrough nonetheless.

Rob has always hated borrowing things. I blame his childhood librarian, Snagglepuss, whom I may have mentioned before. He filled Rob with such loathing that to this day--even though he's a voracious reader--he won't take out a library book for fear that he will fall asleep and let it fall on the floor open, breaking its spine. Or get chocolate on it. Or spill something. Or the dog will eat it. He will take out audiobooks to listen to while he paints, because our former librarian exerted her wiles to persuade him and, I guess, because they do not carry the Snagglepuss curse.

When our seasonal neighbors Lisa and Peg returned to Minnesota at summer's end, they left their deluxe Scrabble board with us, because the four of us had enjoyed it over the summer and they thought we could use it on long winter evenings. (They also left us their knife sharpener. Peg and Lisa think of every eventuality.)

Rob got this horrified look on his face and said no, no, no, we'd never touch it and they should take it and if they left it something would happen to it and god help us it's DELUXE. They examined his face for humor, found none, and left the Scrabble board anyway. They may have patted him on the shoulder.

I suggested several times this fall that we play Scrabble, but he got that same look on his face and pretended I hadn't said anything. It took a power outage and much red wine to settle him down at the board--next to candles, yet. Which drip wax! Melt things, burn things! He switched from red wine to milk, but otherwise he threw caution to the winds.

Unfortunately, I got all the expensive letters--even got a U at the same time as a Q, which never happens--and he was humiliated score-wise. Life is so unfair.