Castle Ne'er-do-well is in full holiday prep, getting ready to host a sit-down Christmas dinner for twelve neighbors and friends. Finally, a chance to use my grandmothers' tablecloths. Possibly, a chance to dust the cobwebs off the rafters, although I wouldn't bet money on that.

My edited manuscript hasn't arrived from New York, "overnight" shipping meaning two or three days in this part of the world. That meant I could cheerfully goof off at the annual Rockbound Chapel carol sing Sunday and my neighbor Cope's annual women's lunch yesterday, not to mention two parties Saturday night. (I've already put on my Christmas weight. Damn.)

Rob cheerfully (sort of) went to an Emergency Management seminar in Bangor yesterday--he's the volunteer Emergency Management Director and 911 Addressing Officer for Our Little Town, appointed by the Department of Homeland Security as our first line of defense when al-Qaeda frogmen come flip-flapping up from the harbor.

But that's not the holiday spirit, is it?

The Rockbound Chapel carol sing has been taking place the Sunday before Christmas for 30 years. Some years, it's been standing-room-only, but we've been weather-cursed the past couple of years. Last year it got cancelled because of a snowstorm; we had snow again this year, but a dozen of us turned out anyway. Here's what it looked like outside--not really that much snow (we ended up with just five or six inches), but the plows had only gotten started so the driving was a bit dicey in places. 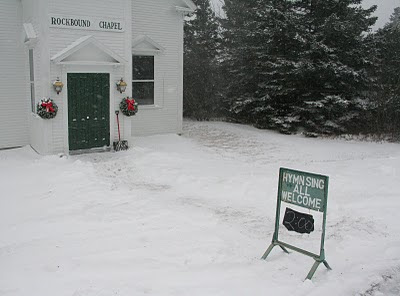 The pianist didn't make it, so we snuggled up to the Christmas Tree and sang a cappella. 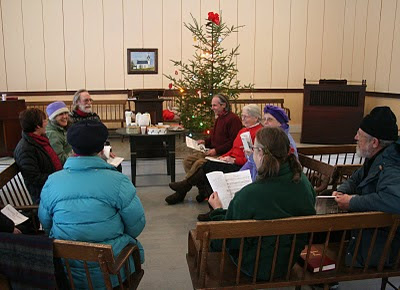 Because it was the thirtieth anniversary, those who'd been around for a while told stories about how the tradition got started, the time the guy played the saw, the various pianists over the years, and the hilarity of the carillon manufacturer when George Fowler (amazing fiddler, also a bookseller and retired pharmacist) tried to see about getting the 40-year-old clock-chiming mechanism fixed. (Turns out carillons are all computerized now, and nobody's sure what to do about even such a relatively young relic.) Below, George describes the mystique of the chapel's oil furnace thirty years ago. That's Sally Aman, one of the carol sing's originators, at left. George's wife, Pat, is at right. 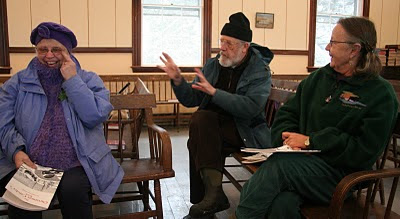 And here's most of the crowd--unfortunately, two of our number had left already to drive home to a neighboring town. After this, we stood around and ate cookies, then dismantled the tree, tidied up the hymnals, and mushed home. 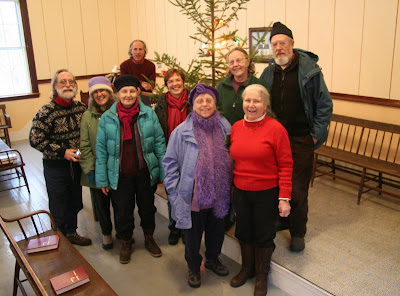 Yesterday, I dutifully took my camera to Cope's Christmas luncheon and promptly forgot it existed in the excitement of chatting and eating. (Cope made her famous baklava. Good thing my cholestrol test got put off until January. I will eat nothing but oatmeal starting December 26.) I was so overwhelmed by it all that I almost forgot the camera all over again when I left, but Cope called me back and I got a shot of the few remaining celebrants. That's Cope at left, with Leslie in the middle (the astute observer will note that she also was at the carol sing) and Judy at right. 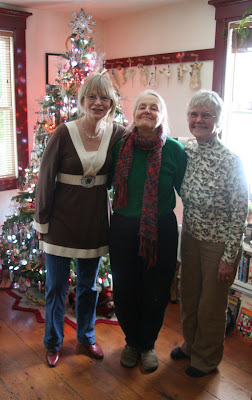 P.S. There's a ladybug in my office, batting against the lightbulb. She's driving me nuts, but what am I going to do, put her out in the snow? Squish her? What would Santa Claus do?

Put her in a terrarium(sp?) (you know, that thing you put bugs into to observe) and then feed her/him/it various things and see how long it survives before succumbing to being overfed. Or at least that`s what I would do......*ponders if that`s why I never see any bugs inside the house, just mice, the word has gotten out that I overfeed them....* Hmmmm.....
Kzspot
p.s. my word verification thingie is upeso, which reminds me of UPS, because I am waiting impatiently for my Harry Potter dvd!

I haven't gotten the HP dvd yet. My usual local sources didn't seem to have it. Also, I seem to have lost my Goblet of Fire dv--probably lent it to someone. *sigh*

We have loads of ladybugs in our house, too. They seem to squeeze in somehow under the screens. I'm always finding them spinning on their backs on the floor, so I pick them up with a damp bit of paper towel (which they willingly crawl onto), and tuck all in the leaves of a houseplant hoping the ladybugs will find aphids or other tasty snacks. No idea if this works, but it makes me feel better.

And our city friends ask, "what do you DO all winter in Maine?"

Hmm, that sounds like a manageable solution. If I ever find her again. Maybe she'll find her own way to the plants...hope it's not the lemon tree, because I'm putting Christmas lights on it. That could be unsettling for a well-brought-up ladybug.

My word verification is Desha, that should be her name!

Still no sign of her, though, so I guess she's Desha-peared.