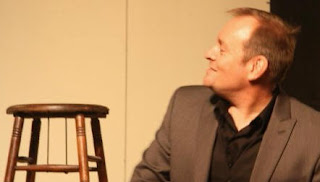 Tim Pugliese has a flexible face and a voice to match. This is helpful when you have to transform yourself from Ebenezer Scrooge into a small, shy housemaid. And back again two seconds later. (That's him talking to himself in the photo at right, courtesy of New Surry Theatre.)

My neighbor Ken Carpenter and I went to Blue Hill last night to watch Pugliese in a one-man rendition of A Christmas Carol, and we had such a good time that Rob the Grinch almost wished he'd gone, too. (Not quite. Almost.)

On a bare stage, dressed exactly as he is in the photo, Pugliese prodded our imaginations into visualizing his setting and whatever ghost or early Victorian he happened to be playing or addressing at the time. At one point I caught myself watching an empty space instead of the actual human being in front of me, a sign either that Pugliese was pretty good or I'm losing it, if not both.

The man must have a memory like a steel trap. He recited a truncated version of Dickens' novella verbatim, without a moment's hesitation. Yikes.

As usual, I was impressed by my neighbors, too. Shari John directed and her husband Frank built the set. Nolan Ellsworth, who is days away from turning 15, helped Shari John and Tim Pugliese adapt the story for the stage, and also served as stage manager, did the program art, and helped with tech. Yikes multiplied.

I have to say I was itching to meddle with the lighting design, not that I know a thing about theatrical lighting. But I envisioned, for example, a beam of white light helping us to imagine the Ghost of Christmas Past, Scrooge spotlit on a darkened stage to heighten the drama at some points, perhaps some graying of the edges on that stark set. There was a moment when the lights went out and Scrooge's face was lit only by a candle. That was very cool, and I wish there had been more moments like it.

That's my only quibble, though. Otherwise, amazing.

IN OTHER NEWS: I got my revision letter on SMALL PERSONS WITH WINGS yesterday at 6 p.m. The line-edited manuscript is, er, winging its way to me as I type. (I hope...Penguin's mailing computer kept rejecting our address.) I have until roughly the end of January to put things right for copy-editing, and there are a couple of largish issues amid the myriad of small things. For example, the magic still doesn't entirely make sense, god help me. Yikes, metastisized.

Also, the blogger E.I. Johnson has interviewed me, asking fun questions. Find them (and the answers) here.

I was at the show last night. Tim amazes me most of the time. Talking to him after the show, he said that memorizing the script was easy. Remembering where to look when he was shifting from character to character was the hard part.

Needless to say, my husband and I were thoroughly entertained.