I decided to review an oldie but goodie this month--no particular help to book vendors in this holiday season, I'm afraid, but I didn't finish GOING BOVINE fast enough and I would have had to re-read anything else I chose and I didn't have time. So there. Plus, this is a perfect book for a winter fireside, or a snowy afternoon tucked up in your bed. As always, click the icon to find more Book Review Club entries. 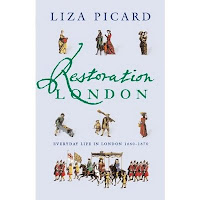 If you like researching books almost as much as writing them, you can’t help envying Liza Picard. A retired lawyer with the Inland Revenue (Americans, think IRS), Picard has spent her golden years (so far) immersed in ancient diaries, cookbooks, magazines, bills, letters, and whatnot, researching daily life in London at various points in its illustrious history. RESTORATION LONDON was the first, followed by DR. JOHNSON’S LONDON, ELIZABETH’S LONDON, and VICTORIAN LONDON. Picard is now 82.

She told The Guardian years ago that RESTORATION LONDON set out to be a biography of Elizabeth Pepys, whose husband, the legendary diarist Samuel, was an official in the administration of Charles II. She collected mountains of information about domestic life in the latter 1600s, but not much about poor Elizabeth. Nevertheless, the tidbits she’d jotted on reams of index cards called out to her, and RESTORATION LONDON was born.

The book is organized the way a lawyer would organize a brief, Picard says. The result has been called “a near-perfect bedside book,” and that’s true. Picard divided her work into four parts: The Urban Environment, The Human Condition, The Social Context, and Horizons (meaning religious beliefs, superstitions, and world view). Each part is subdivided into chapters and each chapter into sections, some of them just a few paragraphs long.

The book is fun to sit down and read page after page. But if you’ve just got a minute or two, you also can open a page at random and dip in. And if you’re looking for information about a specific topic—Sanitary arrangements? Medical care? Slang? Women’s clothes? Sex?—the table of contents or index will lead you exactly where you need to be.

Utility aside, this thing’s a hoot. Here are some of the facts I now know: The less frequently you did your laundry, the higher your status—infrequent laundering meant you had a lot of clothes, and some great houses only laundered twice a year. In the kitchen, you kept flies away with pots of aromatic plants and by lining shelves with the color blue, which flies supposedly didn’t like. Articles of clothing were important bequests. The rules of mourning were many and strict—one wore black wool, for example, even when one could afford silk. A popular way of preparing a pike for cooking was to “rub his skin off whilst he lives.” Poor pike.

I just opened RESTORATION LONDON at random, and found a page and three lines about dentistry. We learn that “recommended daily care included scraping away plaque.” Also, “When caries did occur, it was thought to be due to a worm in the tooth, and an ‘operator for the teeth’ in the local market or fair would remove the worm and hold it up for inspection by his admiring audience.”

Picard then covers pain-deadening and extraction (with the comment that “operators seem to have had a curious reluctance to get in there and pull, unlike midwives”), how false teeth were made and fastened, and whether you could actually eat with those teeth.

The section ends by pointing out that nobody gave toothy smiles in contemporary portraits. “Could it be that, when caries and accident caught up with our seventeenth-century ancestors, they kept their mouths shut about it?”

I’d love to have tea with Liza Picard.

Apparently, I have a very high status....based on how behind I on laundry. I will mention this to my children the next time they complain (tomorrow morning when getting ready for school!). I love these kinds of facts! Also, I'm curious to hear what you think of Going Bovine. (which I haven't started yet).

So far, I'm loving it. The characters are funny and endearing and true-to-life, even the angels and gnomes.

What an interesting way to organize a book - and very useful for those doing research for a novel. Thanks for sharing an old favorite.

What an interesting book. I'll have to look for it and her other works. Thanks for reviewing this little gem.