In the dregs of February, we need this blog. (Thank you, Fuse #8.) (I think. It was a while ago. I bookmarked it and forgot about it until today.There will be 7-10 inches of fresh snow tomorrow and Monday, and I can't ski on it. So I definitely needed the pick-me-up.)

Make sure you scroll down to the High Five Escalator.


Posted by Ellen Booraem at 1:36 PM No comments:

There's a very good reason why I haven't blogged for a solid week. Really. An excellent, undeniable, unarguable excuse.

I have nothing to say.

Unless, of course, you'd like to hear about Cape Verdean animism. After weeks and weeks of fighting this stupid sequel, I have finally, finally reached that point when your innards hum with new ideas and anything that makes you think about something else seems like an imposition. Taxes, for instance. The Brooklin Youth Corps budget. Blogging.

This does not mean that the writing is zooming along, mind you. It just means I feel that writing this book is what I'm supposed to be doing, as opposed to trudging out to find paying work. The fact that there is no paying work is a huge help.

The writers that starve in the spring, tra-la...

My funny bone reawakened last week with the news that Bill and Joyce at Literate Lives have decided to sponsor a Grand Discussion about The Unnameables. Scroll down to check out the self-portrait for their flyer...

I'm getting all intense about drafting a possible sequel to The Filioli. (I say "possible" because the sequel to The Unnameables ended up being rent limb from limb and the still-warm parts grafted onto the first book.)

Today I did a "save as" on Chapter Five so I can see what happens if it takes a different direction. (This is why it's much wiser to become a writer rather than a painter, if you have the choice. There's no "save as" on a canvas.) Then I went to the library for another round of Stump the Librarian, and the excellent Stephanie Atwater is looking on interlibrary loan for books on animism, the Cape Verde Islands, or both. How does any of that relate to a fairy and/or a pub? Heh heh heh (nervous laughter)...good question.

Speaking of the library, they're having a fundraising auction in which all sorts of goodies are available for a song, including books by 2k8ers and others. The bidding closes at the end of this week, so have at it!

Speaking of having at it (not really, but I couldn't think of a segue), I'm participating in Kids(heart)authors Day, during which kidlit authors and illustrators in New England and New York spend Valentine's Day loving up some independent bookstores and signing books for people to give as valentines. Rebekah Raye and I will be at Sherman's Bookstore in Bar Harbor Saturday, February 14, from 10 a.m. to noon. If you're not in Maine, take a look at the regional web site and find a bookstore near you. Be there or be (heart)less.

Figured I might try this. Numbered listy things tend to organize the mind.

1. Considering the amount of trouble I have keeping up with this blog, it seems odd that I'm getting involved with another. We're just getting organized--about twenty kidlit fantasy writers, about half of us published or soon to be so. We're calling ourselves The Enchanted Inkpot. Stay tuned.

2. Like lots of other long-time readers, I have John Updike on the brain. I grew up in Beverly Farms, MA, where he was when he died. When I was growing up he lived in nearby Ipswich, and I would catch glimpses of him now and then. One time, I recall, we both heard Nina Simone at Castle Hill, a seaside mansion in Ipswich that at that time was a music venue. In the sixties, I read everything he wrote--Couples was supposed to have been based on some shenanigans in Beverly Farms, and the back-fence speculation went on for weeks. Don't know why I stopped reading him--somewhere I got the idea that he was too much for me, although I enjoyed The Witches of Eastwick. Like everyone else who's made this confession, I will now try again.

3. My writers group at the school is exceptionally eager and smart this year, and I'm also working with an eighth grader at The Bay School as well as the third-grader I've mentioned before whose villain is bent on destroying the world. The Bay Schooler is writing a fantasy novel which she hopes will be 200 pages long. Right now she's at page 64. I think she's more than capable of hitting her mark, and I'm very envious of anyone who would even attempt a novel in the eighth grade. What a wonder she'll be!

4. Went to a nice party last night, a farewell for our neighbors, Marilyn and Bill, who are moving back to Michigan to be near family. And, possibly, to stop feeling like they're at the end of the earth. Something about the ocean does that to people sometimes.

5. The Bulletin of the Center for Children's Books January issue says of The Unnameables:

Island, a creepy and restrictive world masquerading as a utopia, is as memorable as the intricately developed inhabitants. The pace is languorous and measured, mirroring the easy tranquility of life on Island before the satyr and the ways in which changes ripple slowly into permanence with folks as set in their ways as these. Two maps offer additional insight into the layout of Island, though the descriptions of the setting are so evocative that the maps are decorative enhancements rather than necessary guides.

I'm now a member of an elite fighting force committed to blogging a book review the first Wednesday of every month. The graphic above will be permanently affixed over there on the right when I next have the time and courage to rejigger the sidebar. (Soon. Ish.)

To find the other reviews, visit Barrie Summy, who thought up and organized the whole enterprise. 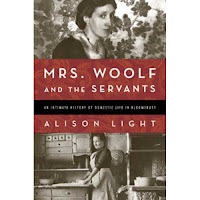 Before the twentieth century, published historians were men. Women wrote letters and diaries—intending to explain themselves, maybe, but rarely with any hope of shaping history. That’s why there are so many complaints that history’s shape has been dictated for us by dead white men.

This goes double for female servants—what we know of them is what we’re told by their employers. What would your employers tell the ages about you? Would it be a rounded portrait? Would it even be accurate?

In her highly engaging Mrs. Woolf and the Servants, British historian Alison Light runs up against this problem and acknowledges it. The granddaughter of a domestic servant, she set out to give voice to women known to us chiefly through their famous employers’ letters, diaries, and memoirs. As far as anyone can tell, she’s done it.

Virginia Woolf (1882-1941) has never had a secure footing in history or literary criticism. She’s celebrated as a re-inventor of the novel, but lambasted for the cold elegance of her prose and a pathologist's approach to character. Personally, I love Mrs. Dalloway and To the Lighthouse, but never made much progress in Jacob’s Room and haven’t even gotten up the courage to try her last novels.

In the popular imagination, she’s known as much for her bohemian friends, madness, and suicide as for her work. She’s admired for her championing of women’s causes—but then one asks oneself how she treated the women who worked for her.

For many Virginia Woolf fans (myself included), it’s her letters and diaries that draw us in. It doesn’t take much reading to figure out that Woolf’s relationship with her servants was an important but disturbing one for her, riddled with explosives. No one, it seems, could make Virginia Woolf madder than Nellie Boxall, her cook for eighteen years.

Nellie and several other women servants made the rounds of the Bloomsbury Group, the writers, artists, and thinkers who were friends, family, lovers, and support system for Virginia Woolf and her husband, Leonard. Raised as upper middle class Victorians, the Bloomsberries shook off their parents’ mores but held on to the trust funds and the assumption that they would never empty their own chamber pots. They were fun, interesting, idiosyncratic employers, but wildly hypocritical.

Leonard Woolf was a socialist, for heaven’s sake. And yet his autobiography doesn’t even give his gardener a last name, and heaven help the cook who served him underdone meat. His wife knew she was a hypocrite, and fretted about it. Then she’d insult someone for having “a housemaid’s soul.”

Light isn’t quite able to let us into the minds of Nellie and the others. She does her best, tracking down their biographies, extensively researching “the servant problem” and relations between the classes, quoting interviews with others who served in middle class homes between the wars. Nellie Boxall herself was interviewed for the BBC long after Virginia’s death, but she was resolutely uncontroversial.

Mostly, letters from servants were thrown away. And who had time for a diary?

The author is on firmer ground examining the employers, who provided reams of material in their published and private writing. She makes fascinating connections between Woolf’s novels and essays and her domestic relationships, all of which were profoundly influenced by her revulsion for her own and other people’s bodies. She wanted the life of the mind, difficult to achieve when the housemaid comes in to say that the water closet is overflowing again.

It’s hard for me to tell, steeped as I am in Bloomsbury lore, but this book may assume basic knowledge of the characters. It seemed to me, for instance, that the uninitiated might puzzle for several pages before figuring out that Light was telling us when and how Virginia Woolf committed suicide.

A minor confusion—a copy-editing mistake as much as anything—is Light’s tendency to call her main character “Virginia” in one sentence and “Woolf” in the next. At first it seemed she used the given name when she was talking home life and the last name when offering literary criticism, an understandable if unnecessary distinction. Later in the book there’s no rhyme or reason to it, and sometimes you have to stop and think whether she means Virginia or Leonard.

Overall, though, this is an enlightening and entertaining book, perfect for a long winter evening by the fire. Even if you had to build the fire yourself.