...horrible, nonetheless. I picked up Rob's Disease, two weeks after exposure, as far as we can tell. Fever, dreadful headache, stubborn cough, total loss of appetite. (Last chance to get into the thin jeans!) I got it last Thursday afternoon, and yesterday the fever made a surprise re-appearance just when I thought I could lift my head to peer around blearily.

Nothing to report, unless you'd like an hourly update on exactly how I'm feeling and why. No? OK. Back to bed then.

Shrunken Novels and Little Else 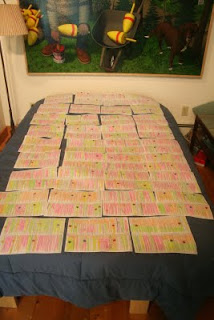 I just realized I never posted about my Shrunken Manuscript experience, which was singular. So I figured I'd make up for it now, since there's not much else to report.

The Shrunken Manuscript technique came my way via Darcy Pattison, whose web site on revision I highly recommend. In July, just before I sent my editor the latest revision on SMALL PERSONS WITH WINGS, I decided to give it a try.

You start the process by doing whatever is necessary to shrink your manuscript to about 30 pages: reduce the font size, eliminate all white space, narrow all margins. Then you decide what concerns you--in my case, whether everybody's sitting around talking too much, as my characters tend to do. You assign a color to each aspect of your novel that interests you, and mark up the manuscript with highlighters in the appropriate colors. In my case, I had colors for dialogue, description, exposition, action, and suspense. You can also stick colorful stickers at any place that you like a lot, although I found that less helpful because it was too subjective.

As I recall, dialogue was pink. Notice the decided pink tinge to the manuscript.

The end of the process is supposed to be spreading out your manuscript and stepping back to figure out if there are places where one color predominates more than you want it to, or if the colors aren't spread around the way you want them. (Sort of a visual composition exercise.) I found that I had my answers long before that point--it was informative enough just going through and marking up the manuscript.

Then it was just a matter of breaking up all the excessively pink places by cutting out their tiny individual bejesuses or interjecting a bit of green or purple or blue. Easy-peasy, right? HAhahahahahahahahaha.....

IN OTHER NEWS: Life has improved since the last post. Rob is on his feet, although he's still got a swollen eardrum and is having to take antihistamine pills, which he hates. The Work in Progress is humming along, 180 pages of excruciatingly rough draft so far and beginning to wind down toward the end. The nasty little voice does keep asking me if it's all Old Hat and poorly written beyond salvation and in general a Humongous Great Big Bore. I loftily ignore this voice until 3 a.m., when it borrows a megaphone.

Otherwise, there's practically nothing going on. I've been varnishing window sashes, because years of wintertime condensation have undermined the original varnish and the wood gets moldy. Rob is doing a marvelous job of holding himself back when every physical and spiritual inch of him is dying to grab the brush and do it right. Such is the torment of the Handy Person living with one who is constantly at war with the inanimate world.

So far I have managed not to tip over the can of varnish when it's poised over carpet or upholstery. In fact, I haven't tipped it over at all. (I suspect I just jinxed myself. *knocks on wood*)

I bribe myself into doing this project by listening to things, most recently an audio of MISTRESS OF THE ART OF DEATH by Ariana Franklin. (The link is to the hardcover, because the audio book page doesn't have a cover photo for some reason.) I also have been listening to MISTRESS to bribe myself into exercising, except on the stationary bike where I'm reading Diana Wynne Jones' HOUSE OF MANY WAYS. Before I go to bed I'm immersed in Neal Stephenson's THE DIAMOND AGE. I suppose this could get confusing after a while, but it helps that they're hugely different from each other and each is excellent in its own way.

And not a preponderance of pink in any one of them.

Posted by Ellen Booraem at 1:31 PM No comments:

In Which the Author Employs Sarcasm

It's been an inspiring couple of weeks at Castle Ne'er-do-Well.

I hit the doldrums with The Gloucester Ghost, about three-quarters of the way through an increasingly rough draft. Kept applying the seat of my pants to the seat of the chair, and did grind out 1,000 words a day, the bare minimum for self-respect, but then gratefully ran off to do other things. And the very last bit I did needs to be redone, I realised the minute I finished it, because we're finding something out that we shouldn't know for a chapter or two. *Cue tragedy soundtrack.*

Among the distractions was preparing for a trip to Montreal, where I would meet my cousin Abigail for three days of frolic. I also planned to visit my on-line friend Lyny and her family, which includes a one-year-old and a three-year-old and seeing them would have been a real hoot.

"Would have been" because Rob got woefully sick last Friday, and has been on a fever rollercoaster ever since. We thought it was the flu, but it turns out to be an ear infection caused by who knows what, maybe a cold, maybe seasonal allergies. His temperature was below normal this morning, so he leapt out of bed declaring that he was going down to his studio to work. I threw a hissy which, surprisingly, had an effect. He sat and read this morning, then his temperature went up again and he went back to bed. He'll be like this all week, if his previous experiences with fever are any indication. He gets them about once or twice a decade, thank heaven.

The upshot is that tonight's the night I would have been with Lyny and Patrick and kids, and I'm home instead. Poor Abigail is all by herself in Montreal, although she's traveled alone before and is perfectly capable of entertaining herself.

Fortunately, I took a few days off from The Gloucester Ghost through all this, and when I got back to it today I had a much better time. Knock on wood.

The One Really Good Thing: On Monday, I went to the Belfast Free Library to talk to a teen book group, which was so much fun it almost made up for the ear-infected weekend. They'd all read The Unnameables and had astute questions and comments. They even said they wanted a sequel, mostly because they want to see what Mainland is like and how the Islanders would cope with seeing more of it. I want to see all that too, as I told them, although I've got a couple of pressing ideas that have to be dealt with first.

Anyway, many thanks to Jane Thompson, the youth services director, for choosing my book and inviting me over. Additional thanks and admiration to the lovely, intelligent kids in the group!