I'm chipping away at a Picasa album about my trip to Ghana, but the way I operate, that'll take us through July at least. So I figured I'd throw a few of my favorite pictures at you as a place-holder. They're all of people: My traveling companion, Lisa, and I decided early on that, given a choice, we wanted to meet people more than we wanted to see monkeys and hippos. And, boy, did we ever.

I've heard it said that you go to East Africa for the landscape and West Africa for the people. Unlike most of what you hear about Africa, this turns out to be true, if Ghana's any example. I hope we'd be as welcoming to a well-meaning but clumsy visitor to the U.S. , but I'm not 100 percent confident.
﻿﻿ 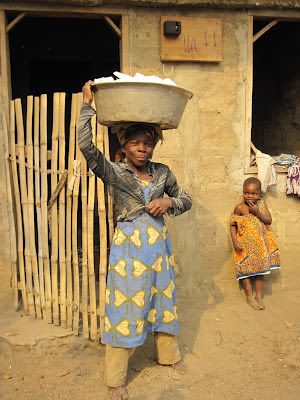 I'm back from Ghana, and almost back to reality after a stunning three-week trip. I have 1,033 photos on my camera, which I'm trying to edit before getting them online somehow. In the meantime, with the fervor of the recently returned, I've chosen for this month's review a Ghanaian book I read on my Kindle while I was away.

There's something magical about engrossing yourself in a murder mystery set in an African village not that far from your very own mosquito net. But this book, written by a poet, would be magical wherever you  read it.

Last month, spending a week in Abutia Agodeke, a tiny village in Ghana's Volta Region, I uncorked the Kindle and started reading this book. The room I shared with my travel companion, Lisa, was in a simple, modern brick house that belonged to a village elder. I didn't really need the mosquito net provided for me--the windows had screens, and it was dry season so we'd seen maybe one mosquito. But I was far from home and liked feeling tented in, the only light from my Kindle and Lisa's headlamp across the room.

Outside my window was a world of tidy mud houses with thatched roofs, much like those Nii Ayikwei Parkes describes in TAIL OF THE BLUE BIRD. Every now and then a sleepy goat would bleat. Otherwise, it was just me and Opanyin Poku, the village hunter who narrates most of Parke's debut novel.


It's Opanyin Poku who describes the day when a minister's short-skirted girlfriend, "the one whose eyes would not lie still," follows a blue-headed bird and her nose into Kofi Atta's hut, and starts shrieking "like a grasscutter in a trap." (A grasscutter is a ginormous hamsterish rodent whose meat is a delicacy.) The girlfriend has discovered something repulsive on Kofi Atta's bed--a fetus? Afterbirth? Whatever it is, it's alive with maggots and stinks to high heaven.


Because of whose girlfriend she is, the horrifying report gets back to Accra, Ghana's capital city. A police inspector on the make strong-arms Kayo, a lab doctor who got forensic training in England, into taking on the case. Regardless of the facts, the inspector wants a "full CSI-style report" that will create a high visibility incident he can use for a power-grab. Failure to deliver such a report means imprisonment or worse.
﻿﻿﻿
﻿﻿﻿ Kayo and his sidekick, Constable Garba, set up a methodical scientific investigation, although they also endear themselves to Opanyin Poku by observing the niceties of village protocol. As it turns out, there's nothing methodical about this situation. The repulsive object, rapidly decaying, proves to be human but not a fetus. At the behest of the village medicine man, the policemen burn it in the woods. The task transforms into a mystical experience, and the book transforms from procedural to fable.

This is a surprise at first, although it probably shouldn't have been. The narration in the first part of the book shifts back and forth from Opanyin Poku in first person to a third-person narrator with Kayo's viewpoint: from traditional to scientific, from rural to urban, and the two worlds don't meld. It's clear that Kayo is a good guy because he observes village courtesies, but it's also clear that he's a technical man, married to his ALS goggles and fluid samples.

The burning ceremony shakes him to his core. It begins his journey--and ours--toward the real truth of what happened in Kofi Atta's hut. Forensic science gives way to magic and storytelling in an exceptionally satisfying way.

According to his Amazon bio, Nii Ayikwei Parkes divides his time between Ghana and the U.K., with occasional visits to the U.S. for readings. Ghana has honored him for his poetry and literary advocacy, and this book was shortlisted for the 2010 Commonwealth Writers' Prize. He writes children's stories as K.P. Kojo, notably about Ananse, the trickster god.

Judging from his YouTube videos, he's got his school visit techniques down cold. Here he is telling one of his Ananse stories: