Click icon for more
book review blogs
@Barrie Summy
Another month, another edition of the Book Review Club. The stakes are higher now, because fall's closing in and the woodstove's cranking up. Gotta line up those winter books! Here's a good one. Don't forget to click the icon for more reviews! 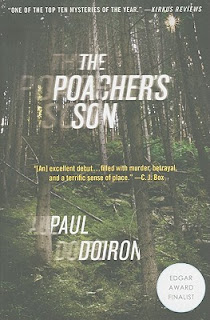 
Depictions of Maine range from the desperate poverty in THE BEANS OF EGYPT, MAINE to the desperately inaccurate Cabot Cove of the 1980s TV show “Murder She Wrote.”  Paul Doiron’s version is somewhere in the middle—there’s truth in THE POACHER’S SON, although we see a lot of it from the passenger seat of a pick-up truck rather than close-to.


Doiron is the editor of Down East: The Magazine of Maine, a gorgeous and highly readable publication whose scenery tends to the Cabot-Coveish.  He also is a Registered Maine Guide. An author’s note tells us that this book is rooted in a feature series he wrote for Down East, presumably on the Maine Warden Service, and Doiron’s depth of knowledge about the woods and their denizens serves the book well. He gives the wardens—trained law enforcement professionals whose mission is to uphold fish and game law and protect Maine wildlife—every bit of the respect they deserve while also rendering them human, a feat that made this book an Edgar Award finalist.


This is the first of three mysteries starring fledgling game warden Mike Bowditch, and word has it that more are on the way. I’m looking forward to catching up with ol’ Mike, and it’ll be fun to watch him get seasoned in his job. In this book, he’s a wide-eyed newbie with a shining career ahead of him, eager to confront both marauding bear and unlicensed fisherman.


But Mike has a deep, dark secret: his dad. Jack Bowditch is a man of the Maine woods, able to track and trap and find his way. He’s also a drunk, a womanizer, and a poacher, ravaged by Vietnam, incapable of maintaining a healthy relationship with a wife, a boss, or a son. Mike spent his early years in a series of depressing north woods shacks before his mother escaped with him to gentrified Southern Maine and a better marriage.  His contacts with his father have been nasty, brutish, and short.

Mike’s girlfriend has left him, unhappy about the gentle poverty and loneliness of a warden’s life. Still reeling from her departure, he’s in no shape to deal when he finds out a beloved young cop has been killed and the chief suspect is—you guessed it—dear old Dad. He reacts in a succession of increasingly foolhardy efforts to prove that his father’s innocence, risking career, love life, friendships, and, eventually, his life. As he blunders into the woods on his father’s trail, betrayal awaits behind every tree. But there’s also a new clarity about what—and who—matters most to him.


Doiron adds realism by setting his murder in the context of North Woods development, a hot point in Maine politics for the past two decades or more. Developers have bought up paper company land and want to oust those whom the old owners permitted to build camps there. He does not preach, simply uses the situation to wave red herrings under our noses.


It’s all extremely satisfying. This is one of those mysteries that keeps you moaning, “Oh, no! Don’t do that!” and then turning the page. Higher praise does not exist.

Dear FCC: I got the next one for my birthday. I want another for Christmas. See to that, will you?