It's spring, and we're all rushing out the door to dig up the garden and soak up the sun. If you have a moment for reading--a body's gotta rest, right?--I strongly recommend this and its companion book.

Don't forget to click the icon for more reviews! 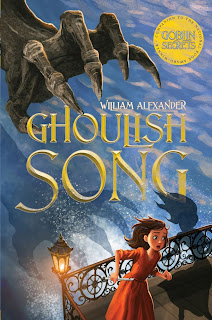 The authors I envy most are those who achieve what I guess I’ll call “texture”: a magical weave of darkness, wild imagination, humor, and heart. William Alexander is one of these, and his skills are evident in GHOULISH SONG.

This is a companion book to GOBLIN SECRETS, which won the National Book Award last year. Both are set in Zombay, a town divided between rich and poor, seamless and seamy, mechanical and magical.  The river  that splits the city is spanned by the Fiddleway, a marvelous bridge that is the crux of both books. It’s so broad that people have built houses on it, and its clock tower can be seen from almost everywhere. It’s a sanctuary for criminals, but also its central street is lined with musicians. Goblins--who specialize in masks and theater--live there if anywhere.

Kaile, our heroine, lives in Southside, the dusty, teeming, jumble-built poor side of town, home to witches and charms and curses. When we meet her, she seems a nice enough kid but unconnected to the world. She has good reason—her family, hardworking proprietors of a bakery and alehouse, doesn’t have time to express affection or listen to one another. Kaile keeps her thoughts to herself and does her work, waiting for a word of approval that never comes.

When a goblin gives her a flute carved from somebody’s bone, she grasps at it as a way to reconnect with the one family member who reached out to her: her grandfather, a musician who died recently.  Unfortunately, playing the flute separates her from her shadow, which is bad news for a couple of reasons.

For one, Kaile’s shadow stays by her side, now a separate being who doesn’t like her that much. For two, nobody else can see the shadow, and a girl without a shadow is officially dead, a walking ghoul. Her family sings her funeral song and that’s it—she and her shadow are on their own in the dusty South Side streets.

Kaile sets out to discover the flute’s history and whether she can undo its curse. Her adventures eventually take her to the Fiddleway, where she learns that music is more than an entertainment: It’s a force that can either bind or pull apart. It will be her job to save her city by making sure it does the former.

There are so many wonders in these books: witches, goblins, and a ghoul made of drowned people’s bones; a Guard captain with mechanical legs, hands, and eyes; the city clock, on whose face a glass sun follows a glass moon across the sky.  Kaile’s shadow is a gem of a creation, functioning as companion, alter-ego, and conscience, but also as guide. After all, who knows us as well as our shadows? (And it turns out we treat them horribly.)

The events in the two books are concurrent—we catch glimpses of the GOBLIN SECRETS characters in Kaile’s story, and the two plots end with the same event. You could read either one first. Alexander has said he’s working on a sequel to both. That’s a relief, because although each book is a complete and satisfying story, we have a lot more to learn about Zombay and its clock tower.

Dear FCC: I bought this book. The author is a colleague at The Enchanted Inkpot, but if I hadn’t loved his book I wouldn’t have written about it.