This entry for the Book Review Club is utterly, completely, totally biased. Three friends of mine have books out, and I love the books to bits so I’m bloody well going to tell you about them. I’ve organized them by age: picture book through adult.

I can’t stress enough how prejudiced I am. (Got that, FCC?) One book (GOOD CAT) was even present from the author, who is in my writers group. (I bought the other two.) But I swear, if I didn’t love them I wouldn’t be writing about them at all—I’d just shut up and smile. Really. You can trust me. 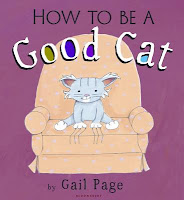 This is Gail Page’s third book featuring Bobo, a huge, clumsy, adorable fool based on her late lamented dog, Gimpel. The New York Times once described Bobo as “the canine Oscar Madison,” and that’s about right.

In his earlier adventures—HOW TO BE A GOOD DOG and BOBO AND THE NEW NEIGHBOR—Bobo learned how to sit and stay, and succumbed to a muffin temptation that taught him to share. This time around, Bobo is saintly (we see him sweeping the floor and dusting the cake) but beleaguered by a kitten named Bonkers. 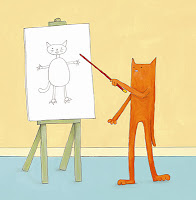 In simple, boldly colored illustrations, he tries to apply his hard-won know-how by teaching Bonkers to sit and stay. No dice. The little menace knocks over the fish bowl, unrolls the toilet paper, and pulls down the curtains.

Fortunately, Bobo still lives with Cat, the deadpan savant who rescued him in the previous two books. Cat gives Bobo a crash course in feline behavior, and the final page finds Bobo and Bonkers sharing the one thing a dog can teach anyone: a cat nap.

As a painter and illustrator, Gail is a brilliant fool herself. Bobo and Cat live with Mrs. Birdhead, who inexplicably wears a contraption on her head that provides a home for a small bird. Bobo has the outlook and mannerisms of a real dog, but he’s always on his hind legs and enjoys a bubble bath complete with back-scrubber and rubber ducky. Bonkers is the uber-kitten, insanely cute and insanely insane.

This level of whimsy is a delight to all ages, one to a hundred and one. It even delights the curmudgeon I live with. A book can meet no greater challenge. (Click on the pictures to appreciate them larger.) 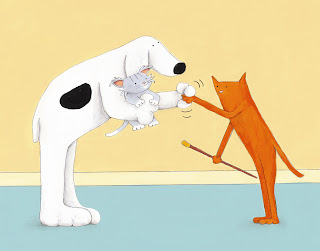 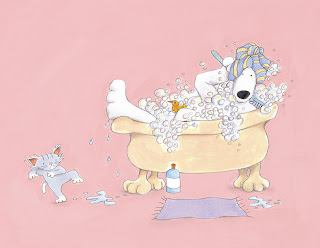 Ever want to run away and join the circus? What if the Big Top were a spaceship, being pursued by opposing sets of intergalactic bad guys and/or bureaucrats?

When the chance presents itself to Beatrix Ling, a talented teenage gymnast whose hair has turned pink overnight, she doesn’t hesitate for a minute. Her life on earth is dreary: Her parents are dead, and she’s in a boarding school where everyone looks down on her. Among its other charms Circus Galacticus has the Ringmaster, a sequined mystery-man who insists that Trix’s pink hair proves she belongs in the Big Top.

The Ringmaster and crew are Tinkers, outcasts blessed with wildly diverse colors, shapes and skills. The Tinkers are on the lam from the militantly conformist Mandate and from an intergalactic government that has outlawed them both. Trix, whose parents entrusted her with a mysterious rock before they died, has already had a visit from one of the Mandate’s henchmen, a creep in a silver gas-mask who tried to take the rock from her.

Trix isn’t sure she’s a Tinker, but she’d sure like to belong somewhere. Her efforts to fit in among the circus’s other young adults are every bit as important to the story as the larger issues of diversity and self-determination.

Written for younger teens (Amazon has it as ages nine and up), CIRCUS GALACTICUS is Deva Fagan’s third fantasy but her first foray into science fiction. It’s heavier on the fantasy than the science, which is the way I personally like my SF, and the emphasis is on characterization. I was in Trix’s head and heart from page one, and I’m totally in love with the Ringmaster—he’s Doctor Who with humility and real sweetness.

Settle down with this book the day after Christmas. It’ll be your reward for making it through the season.

All My Dogs
By Bill Henderson
Drawings by Leslie Moore
David R. Godine, 2011

Bill Henderson is the founding publisher of the Pushcart Press and its famous Pushcart Prize. But mostly he’s a story-teller, as evidenced by this and the four memoirs that preceded it.

If you’ve read any of his previous accounts (HIS SON, HER FATHER, TOWER, SIMPLE GIFTS), you think you know Bill’s story well enough to be leery of another version. Turns out that if you want to make an old story new and fresh and charming, you simply add a dog. Or ten.

I have read three of the earlier books, and yet I couldn’t put this one down. I love dogs every bit as much as Bill Henderson does, but I’ve never paid that much attention to what they were teaching me. Bill’s chief gift is that he does pay attention.

Here, for example, is his recollection of the day in the early 50s when his dog Trixie won “Best in Show” at the elementary school pet exhibition.

She and I walked home together waving her blue ribbon, gushing in victory. (Gushing was another of Pop’s verbotens. Men of that era were supposed to be reserved.) Trixie gushed whenever she felt like it. She barked when it suited her, danced on her hind feet when asked, and charged around our house and yard possessed by her dog’s wonder of each second. She was a supreme gusher. Years later I would remember that lesson from her—it was OK to dance and wonder and gush.

I barely survived the tale of the later dogs Ellen and Rocky—I won’t tell you about it, partly because you shouldn’t know and partly because I’ll start sobbing. Each of the ten dogs Bill’s known has a tale (so to speak) of wonder or poignancy or insight. They are enriched by pencil drawings of each dog by Leslie Moore.

Read this one New Year’s Day, for solace and resolve.

EDITED TO ADD: I just realized I left out an important point (that's what I get for quitting coffee). Bill Henderson has had an extremely entertaining life--running the gamut from New York partying to religious revelation--and he tells it well. This is not an animal sob story. It's fun and funny, although also insightful.
Posted by Ellen Booraem at 10:33 AM 6 comments: