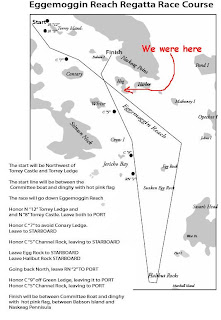 ﻿﻿
﻿
I'm out of time, so the rest of August will have to wait. Meanwhile...
The writing report: I'm in this weird almost-writing-but-still-researching stage on the next book while waiting for my editorial letter on CONOR'S BANSHEE.﻿ This very day I got the idea that is starting to make the new book work, and is getting me excited about writing it.  Then I went kayaking, because kayaking buddies Lisa and Peg are about to go home to Minnesota and we had to get one more in. Hey, it's August.
The knitting report: Got the yarn for a cotton-blend sweater, and it could be very cool. Before Lisa leaves, she has to translate the directions for the sleeves. And then let the torment begin.
Posted by Ellen Booraem at 4:01 PM No comments:

Click icon for more
book review blogs
@Barrie Summy
Okay, this one's a little friendlier to the beach reader than my last one was. It's a hoot, plus it's old enough to be out in paperback. Don't forget to click the icon for more reviews! 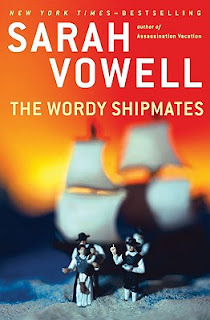 When we think somebody’s a totally repressed killjoy, we call him a Puritan. Sarah Vowell would like this to stop.

Not that the Puritans were a barrel of laughs—especially those who came to New England in the early 1600s. (You couldn’t be a comedian and still lead a religiously triggered invasion of somebody’s homeland.) But they were a lot more complicated than popular history leads us to believe.

For a start, they didn’t call themselves Puritans—other people did, mostly decades or centuries past their seventeenth century heyday. They often called themselves “the godly”—as distinct from their arch-enemies, the Catholics and, for some, the Church of England.

Also, they weren’t a homogeneous group. Some of them still belonged to the C of E but wanted to purify it. Others thought anyone who stuck with the C of E was the spawn of Satan. (Or, possibly, of satin.)

Also, they didn’t mind sex, as long as it was sanctified by marriage vows.

Sarah Vowell has made a career out of reinterpreting history through the eyes of a non-historian. A former, long-time contributing editor for the public radio show “This American Life,” she has written six books that dance from history to social commentary to travelogue. This was her fifth, and the only one I’ve read. I’ll probably let some time pass before I read another, but I’m very glad I found this one.

Vowell’s tale this time is of the Puritan colonization of New England between 1630, when the Massachusetts Bay colonists arrived, and 1692, when Salem got crazy about witches. Her chief characters are John Winthrop, the colony’s first governor, and the colony’s first major outcasts, Roger Williams and Anne Hutchinson.

Williams believed in religious freedom and thought the English king had no right to give away Indian land, but unfortunately was such a wack-job that his views had no effect. His only recourse was to leave and found Rhode Island. Hutchinson, banished for making a theological left turn while female, moved her family to Rhode Island en route to New Netherland, where she and most of her family ended up dying in an Indian war.

There are no chapters in this book—it’s essentially a long essay with pauses—and Vowell regularly leaps over the centuries to link the colonists’ behavior with ours. She brings in Abu Ghraib, Ronald Reagan, even “The Brady Bunch.” Anecdotes from her own life (her Pentacostal upbringing for example) illuminate the Puritans’ story, particularly when she describes her tours of the Puritans’ stamping ground.

Just after reading about the English settlers’ truly brutal attack on a Peguot fort in 1637, we watch Vowell’s horrified seven-year-old nephew contend with a museum documentary on the subject. He has to close his eyes. “When do they have Thanksgiving?” he wants to know. This is one of many points during the book when Vowell gets emotional—sometimes admiring, usually angry. The book is strongest at those points.

This is a gutsy and illuminating approach to history, offered in a wry tone that often had me laughing out loud. I lost the sequence of events at times, but you can get that elsewhere.

That tone, however, is troublesome. Vowell can’t resist a one-liner, and her snarkiness started to get old for me halfway through the book. Since I’m usually a push-over for snark and one-liners (see the “satin” comment above), I couldn’t decide whether she was trying too hard or just needed one more close edit.

That’s why I’ll take a rest before moving on to her latest, UNFAMILIAR FISHES. It’s about the Americans in Hawaii, and I bet it’s a corker.

Dear FCC: I took this book out of the library.
Posted by Ellen Booraem at 10:46 AM 10 comments: