My friend Lisa and I got home from Ghana two months ago, and still I  feel I'm supposed to be there rather than here. We were in Ghana less than three weeks, for heaven’s sake, but I guess that’s the nature of intense experiences.

At the time, I didn’t realize it was intense . That's partly because of the easy-going guys at Disaster Volunteers of Ghana, the nonprofit organization that sponsored us for a week in the village of Abutia Agodeke in the Volta Region, near the city of Ho. (Please follow the link to check out the huge variety of projects they sponsor.) We connected with them through GlobeAware, a US-based organization that arranges "voluntourism" projects all over the world.

DiVOG has been active since 2002, although Richard Yinkah came up with the idea in 1997. The “disaster” in the title is not flood or earthquake, or even famine. It’s a kid going without an education, a village without drinking water, an orphanage without enough food or beds. ﻿﻿﻿﻿﻿ What an amazing concept.
﻿﻿﻿﻿﻿﻿﻿
Richard’s theory was that tourists who chose to visit Ghana most likely would aspire to more than sight-seeing, and would want to be of some use. He established DiVOG to match tourists with villages and orphanages that needed infrastructure (schools, clean water, sanitary facilities) or volunteers (teachers, medical staff, whatever).

Rather than swooping in with a bunch of white people to build something, smile brightly, and leave, DiVOG requires that a village provide materials, work alongside the visitors, house them, feed them, and generally welcome them in. It’s a remarkable idea, and it works: According to the organization’s web site, some 700 volunteers have helped to build 12 schools, 12 orphanage latrines, and 20 school latrines, and have been placed in classrooms, orphanages, and even medical clinics. (A complete list of achievements is here.)

One reason it works is that Richard found staff members just as committed to community development as he is. Our chief contact was Robert Tornu, director of project and volunteer management, and he pretty much blew our socks off. We had these amazing dinnertime chats--neither Lisa nor I has ever had so much fun talking political science. We were humbled at how much he knew about the US, and fascinated by what he could tell us about Ghana, its politics, and it struggles.

The product of a village himself, Robert lives and breathes activism and empowerment, to the detriment of his personal life. He never turns it off—escorting us back in Accra (the capital city) after our week in Agodeke, he sat in the front seat of our taxi so he could debate presidential politics with the driver. When he was in the village, he was constantly surrounded by a group of young men, delivering a pep talk.

Our team of guardian angels also included DJ, who is in charge of building construction but also drove us and escorted us on our various excursions away from the village. (We went to a waterfall, a market, and a kente weaving village.) DJ is a talented stand-up comedian in the local language of Ewe, apparently--he had 'em rolling in the aisles during our introductory meeting with the village. I'd give my eye teeth to know what he said--probably "you would not believe how long it took these old yavoos to get the name of this village right. Don't expect much."

"Yavoo" is the Ewe word for those of us of European descent. Literally, it means "tricky dog." Courtly Ghanaians will either deny that that's the literal meaning, or will explain earnestly that having a smart dog is a very good thing.  Right.

Our third compadre was Bright, a barber by trade who has been seduced by the siren song of community development.  He superintended our work project--to our amusement and, briefly, dismay, this turned out to be painting pictures on the interior walls of Agodeke’s new school, which had been built by volunteers and villagers over the autumn and early winter. (“You do know we’re word people, right?” Lisa kept saying.) (Lisa is a philosophy professor at Gustavus-Adolphus College.)

The people of Agodeke were polite about our artistic skills. They fed us incredible food, danced with us, tried to teach us to drum and cook and carry water on our heads, hugged us, and laughed with us. I can’t say enough about them, so I’ll resort to pictures: 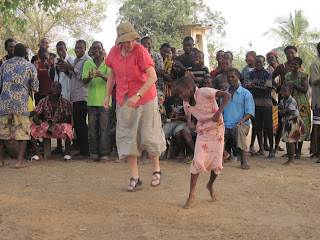 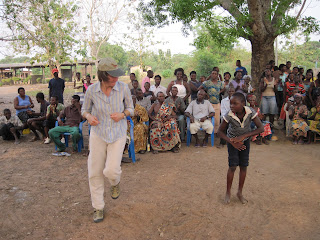 Then there was dancing, and to our astonishment the main event proved to be us. A peculiarity about dancing in Ghanaian villages, we discovered, is that it's more of a performance than a personal indulgence. Rather than everyone getting up and gyrating around, the way we do it, one or two people--three or four at most--dance in front of everyone else. It's a bit off-putting even to villagers, I think--it would take a lot of courage to get up there in front of all your friends and family. (We had the advantage of not knowing anyone.) But once you crossed the Rubicon you'd be golden. Wisha (sp?), the little kid dancing with me on the left, was the best dancer among the younger set, and you could not keep her down once the drums started. 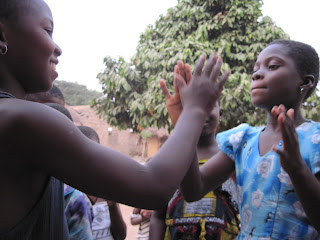 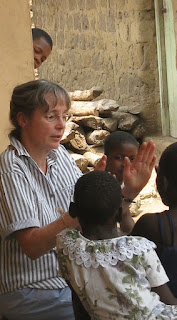 Clapping games are popular among the kids. There always seemed to be a clutch of kids hanging out on the porch outside our room, and we spent a lot of time trying to master the intricacies. 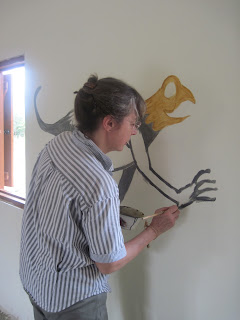 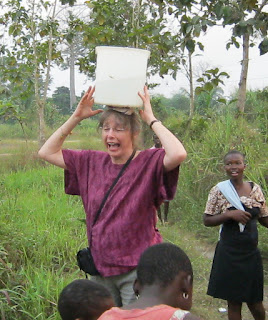 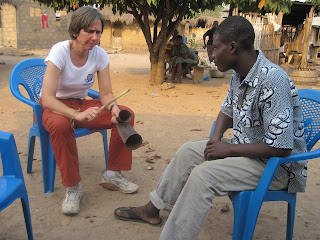 They tried really hard to teach us stuff. At left, Lisa tries out the double bells during a drumming lesson. The photo at right speaks for itself. More yavoo foolishness.

ETA: More Agodeke pix are now in a picasa album.

I'm just finishing a revision (yay!) and then, I swear, will get back to telling you all about Ghana. (God. I'm such a loser.) In the meantime, I have been working my way through my Christmas books, and I've fallen in love once again with the verbal stylings of Sir Terry Pratchett. So, here's his latest book.


Don't forget to click on the icon for more reviews! 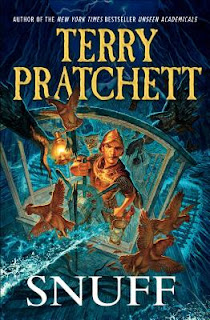 It took me a long time to cotton to Terry Pratchett, and now I have catching up to do.

Especially when it comes to Samuel Vimes, who commands the City Watch in Ankh-Morpork, the starring city-state in Pratchett’s Discworld. There are around forty Discworld novels. I’ve read six or seven, mostly the ones for kids, and this is the first involving Commander Vimes.

My trouble with Pratchett early on was that, although I loved his style, I couldn’t get comfy with his characters. I can’t put my finger on why: Maybe they were too foreign or not sympathetic enough, or maybe I wasn’t in the right mood. Then I met Tiffany Aching, the apprentice witch of the four middle-grade Wee Free Men novels, and I pretty much wanted to adopt her and/or be her best friend.

My dear one gave me SNUFF, the latest dispatch from Discworld, for Christmas. Now I would like to have several beers with Sam Vimes, except he doesn’t drink alcohol so he’ll have to have beetroot beer with chili peppers and celery seed. I’m happy to report that he turns out to have appeared in at least a dozen books, usually as the star, so I have more blissful encounters in store.

Discworld, in case you don’t know, is a flat world supported by four elephants balanced on the back of a turtle. Humans, a few of them wizards and witches, live there in varying degrees of harmony with every fantasy creature you can name, including vampires, werewolves, dwarves, trolls and goblins. Some of the humans and creatures are very nice. Others are utterly the opposite. Their city is a festering den of iniquity. Daily life is a dangerous undertaking.

Also hysterical. On the first page of SNUFF, we learn that goblins have a cult of Unggue, “a remarkably complex resurrection-based religion founded on the sanctity of bodily secretions.” Every goblin makes gorgeous ritual containers for earwax, nail clippings, and snot. Fortunately, water and food are viewed as passing though the body without becoming part of it.

Unggue containers play an important role in the mayhem to follow.

Sam Vimes grew up in the back streets of Ankh-Morpork. Now, after many years as a copper, he is Duke of Ankh and the Commander of the City Watch, as well as a former blackboard monitor. He is married to Lady Sybil, the richest woman in the city. Their six-year-old son, Young Sam, is obsessed with poo.

In this installment of the Vimes saga, the commander is being dragged from the city to his wife’s ancestral home, ostensibly for a forced vacation. He has barely adjusted to the absence of city noise when a goblin girl is murdered and it becomes apparent that the countryside is rife with intrigue and evil-doing. Vimes solves the case with help from a goblin, a local policeman, a bartender, and his trusty valet, Willikins, a handy man with a cross-bow and brass knuckles.

I won’t tell you what happens next, partly because I don’t want to spoil the book for you but mostly because I couldn’t possibly do it. One peculiarity of the Discworld books is that the plots are so convoluted you’d need a computer to keep track of them. This is not a criticism—I loved every minute. But it is peculiar.

What I will tell you is that there’s a serious undercurrent about the treatment of goblins, who are underestimated to the point of enslavement. And Sam Vimes is a serious undercurrent all by himself, convinced as he is that a moment’s inattention and the right combination of circumstances will unleash The Beast in him. He’s a total sweetheart: A loving father, cheerily downtrodden by his wife, with a good eye for the hidden diamond in other people’s souls. But he also fights dirty, and he’s worried that he might lose control.

My next act will be to forget I ever read this book and get my hands on GUARDS! GUARDS!, Vimes’ debut novel. Can’t wait to start at the beginning and get to know this guy.