All Manner of This and That

The Bar Harbor Book Festival rocked, although not exactly the way some might have expected. As is typical of first-year ventures, it didn't draw much of a crowd, so we ran workshops for ourselves. But since there were 25 of us, it turned into the world's most intimate and helpful writers' conference.

Nothing beats hearing someone else describe the level of self-hatred they sink to while drafting. Not to mention the amount of obsessive email-checking. 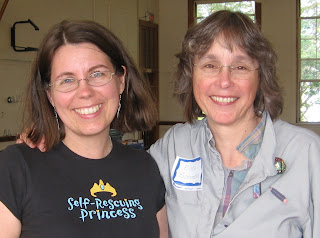 I got to meet other Maine kidlit writers, always a plus. The lady at left with the great t-shirt is Deva Fagan, whose MG fantasy Fortune's Folly now has a place of honor on my To Be Read pile. Deva's a fellow blogger at The Enchanted Inkpot. I had a great time chatting with Megan Frazer, Erin Dionne, Robin MacCready, Kekla Magoon, and Bethany Hegedus, whose works also grace the now-tottering TBR pile.

Kudos to Carrie Jones for organizing this. And watch for it next year!

Wafting off into the wild world of book marketing, the estimable Kirkus Reviews authored a very sweet tweet on August 31: "The most tragically overlooked book of 2008: THE UNNAMEABLES, by Ellen Booraem. Reviewed 9/1/08: http://tinyurl.com/nojcy4." I'm not sure who overlooked ol' Medford, but whoever it is should consider themselves tweaked. Or tweeted, anyway. Kirkus has been a good friend to the The Unnameables, having starred it and highlighted it every chance it got. I'm very grateful.

They get results, too. I learned about the tweet from a comment on GoodReads, and then in a blog review on Librarilly Blonde.

The Horn Book, meanwhile, included The Unnameables on its list of "talented newcomers," which was sweet of them, too.

I think I win the "links per line of type" prize, if there is one. There should be, don't you think?

Watch out...I'm going to gripe for absolutely no good reason.

The weather is gorgeous--blue skies, sweet zephyrs, crisp air...and yet I am unsatisfied. The summer simply wasn't warm enough for long enough, and I don't have the resistance to cold that I usually do. The heat just didn't make it into my bone marrow. I'm wandering around in turtleneck, sweater, and fleece vest when it's 65 out...yesterday, almost 70.

I blame the Republicans.

Just kidding. (Although that's what the political climate feels like these days, isn't it?)

For the record, I thought Obama's health care speech rocked. I'm sorry he's hedging about the public option, and don't for a minute think he's going to stand up for it, which I wish he would. But I'll be OK with regional cooperatives, I guess. I'd even go for the trigger option if I were sure the trigger would set the standards of practice high enough to ever be ...er, pulled. (That "trigger" metaphor is a hard one to work with.)

We had a very nice Labor Day weekend, including a reprise of our neighborhood picnic from last year. Same deal...one measley attempt at game-playing, otherwise five delightful hours of talk, food, and drink. The weather was perfect except, as I may have mentioned, too friggin' cold.

This coming weekend I'm going to the Bar Harbor Book Festival, a new event author Carrie Jones has organized with an eye to encouraging literacy. I'm all for that. My bio didn't make it onto the web site for some reason, but I'm on the author list and schedule so that's what counts. I'll be reading at 1:30 p.m. Saturday, and doing a world-building workshop at 2:30. Hope to see you there!

Posted by Ellen Booraem at 10:46 AM No comments:

As usual, it's like a curtain dropped here. The last hurricane sucked all the warm air and humidity out to sea, and now even a steady sun has trouble raising the temperature out of the sixties. Although I'm sad that summer's over, and wishing it had been a better one weatherwise, I'm ready to hunker down, work, and read. If you're in the same mood, a thriller by Stieg Larsson is a good way to acclimate to the new reality. And don't forget to click on the icon for more bloggy book reviews!

The Girl Who Played with Fire
By Stieg Larsson
Alfred A. Knopf, New York, 2009

God, I wish Stieg Larsson were still alive and writing.

Larsson, editor-in-chief of the Swedish magazine Expo and an expert on right-wing extremism, died of a heart attack in 2004, leaving behind the manuscripts for three of a planned ten-book series of thrillers. The first book, The Girl with the Dragon Tattoo, was a huge hit when it came out in Europe a year after his death, and the English translation met similar acclaim in 2008.

Now the second book, The Girl Who Played with Fire, is out in English, following the career of Lisbeth Salander, a bizarre but thoroughly engaging character from the first book.

Expect to stay up late.

Dragon Tattoo introduced us to Mikael Blomkvist, an investigative journalist who has been convicted of libeling a billionaire industrialist. While waiting to serve his short prison sentence, he’s hired to write a memoir and investigate the disappearance of his subject’s niece forty years earlier. He brings in Salander, a private investigator, computer whiz, and pierced and tattooed misfit, to help him out. The two endanger themselves to uncover the hideously seamy circumstances behind the niece’s fate.

The politics and intrigue in these books ring true for very good reason: Larsson’s real life was not far different from Mikael Blomkvist’s. He was noted internationally as a tireless foe of rightist organizations, and reportedly was subject to death threats as a result.

His Blomkvist is a fine, compelling character, although nothing unique for a thriller. Salander is something else again, Larsson’s vision of what Pippi Longstocking would be like as an adult. Longstocking, the beloved pigtailed character in Astrid Lindgren’s series of children’s books, is exceptionally strong, smart, and self-reliant but exceptionally anti-social if you cross her.

That’s Salander to a tee, and she may be my favorite character in contemporary literature. She’s a scary-smart, a kick-ass heroine, yet as confused and vulnerable as it’s possible to be without spending life in a fetal position. It all fits together in one wonderful mass of human complexity.

In Played with Fire, Salander takes her turn as main character, with Blomkvist riding shotgun. We learn much, much more about “All the Evil,” the terrible childhood events that sent Salander into the Swedish mental health system and, eventually, into the hands of the sadistic guardian we met in the previous book.

All is not what it seems in Salander’s past, as the Stockholm police discover when she becomes prime suspect in a triple murder. The girl depicted in social service records hardly resembles the real girl at all. Why is that? You’ll find out, probably at 2 a.m.

Both of these books have their oddities, mostly in structure. Dragon Tattoo’s libeled industrialist plotline, although interesting and necessary to the series, slows things in the beginning and still has loose ends to be tidied up when the main event is over. That’s a disadvantage in a book that’s otherwise as tight as a drum.

The first half of Played with Fire is a more compelling read than the early pages of Dragon Tattoo, which has to fill us in on the libel suit before it gets moving. The second half, although still a blazing page-turner, goes overboard on Salander’s grievances against the world, and risks turning into a polemic. What happens to her at the end is just a tad too far-fetched, almost played for humor but not quite.

Nevertheless, I’d bring Stieg Larsson back from the dead any day. And I’m holding my breath for The Girl Who Kicked the Hornet’s Nest, the next and—sadly—the final book in the series.