Look at me, blogging again!

Blogging amidst all the kt literary jollification yesterday, I forgot to mention that Bobbie Pyron featured the dog Callie and me on her website. Very cute blog idea. Callie needed some good news, having spent much of the past three weeks in her Cone of Shame from her vet surgery.

Also, there are a couple of tidbits of good news. First, SMALL PERSONS WITH WINGS has been accepted for Scholastic Book Clubs and Book Fairs, starting this coming winter. THE UNNAMEABLES, meanwhile, is on the reading list for the Youngstown State University English Festival, which brings some 3,000 teens to campus every march to discuss the books on the list, among other activities.

I'm so pumped about this stuff.

So, ten writers get together with their agent in a pair of cabins within spitting distance of Rocky Mountain National Park in Colorado.

Here's how they spend the morning: 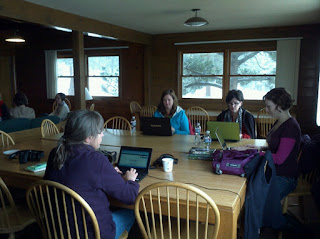 The photo was taken by Kate Schafer Testerman, the agent in question. Ten clients of KT Literary, including me, gathered with her this weekend to hobnob and eat and guffaw. I'm the one with her back to the camera. It may look as if I'm industriously writing, but I'm checking the weather forecast.

Actually, we did get out to the park right after the photo. We saw elk and an alluvial fan, plus a whole bunch of snow, which closed the road to the Continental Divide. I took a bunch of pictures, but can't upload them until I get home. That should be around the 19th, after I wander around Santa Fe for a while with my friend Shelly.

The elk are amazing--this time of year, they wander right into town, no regard whatsoever for humans or buildings or cars. Also saw magpies and bright blue jays, far brighter than out east.

Right now we're around the fire digesting a great Mexican dinner. It doesn't get better.

Gotta love a man who buys you research books. This one was one of my birthday presents from Rob, who watched me struggling to read one physics book after another (okay, actually it was only two) over the summer. This one actually was fun. Who can argue with nanobots? 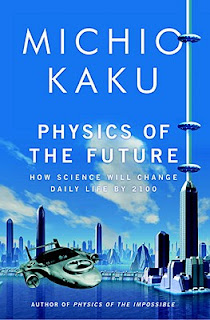 Physics of the Future:
How Science Will Shape Our Human Destiny and Our Daily Lives by the Year 2100
By Michio Kaku
2011, Doubleday

Michio Kaku has an entertaining life. When he can spare time from being a professor of theoretical physics at the City University of New York, he hosts a Science Channel show and two radio programs, as well as writing book after book after book trying to make the rest of us understand how modern science affects us and our future.

Researching this one, he traveled around having cool and useful experiences: Matching wits with a robot here, riding in a self-piloted sports car there. He interviewed some three hundred scientists.

The guy helped found string field theory, and yet he has the common touch. He built an atom smasher in his garage in high school, blowing out every fuse in the house whenever he turned it on. At the same time he credits Flash Gordon with awakening his interest in science and the world of the future. He quotes Einstein on one page and Data the Star Trek android on the next. He’s fun to read; one suspects he’d be even more fun as a dinner companion.

The best thing about this book is the way it’s organized. Eight chapters are devoted to individual “futures”: those of the computer, artificial intelligence, medicine, nanotechnology, energy, space travel, wealth, and humanity. Each chapter has a section on “the near future” (the present to 2030), mid-century (2030-2070), and the far future (2070-2100). This drives home the point that, in many disciplines, humanity has already planted the seeds for a Jetson-like future existence in which our houses respond to voice commands and we drive to work in self-piloted hover-cars.

It all seems so plausible. And, in places, unsettling. Take internet contact lenses, for example. Already, combat forces can train on base by putting on a helmet that projects battlefield images over the existing terrain. It’s not that much of a leap to contact lenses equipped with computer chips that would enable you to surf the net or turn on a movie just by blinking your eye.

As someone regularly called upon to swear at her computer, I can imagine nothing more unsettling. Imagine: At a business lunch with your boss, you have a glass of wine and forget how to blink right. Just as your boss is confiding top-secret corporate strategy, all of a sudden Ralph Fiennes appears before you dressed as Lord Voldemort. That’s the sort of thing that makes a person choke on her chef salad.

The book’s last chapter envisions a typical morning in 2100, from the moment when a computer program named Molly projects its friendly face on the wall screen to wake you and send you into the bathroom to brush your teeth and have your daily molecular analysis, searching for potential disease.

Will the predictions come true? Maybe not. Kaku points out that, in 1964, At&T spent $100 million perfecting a TV screen for telephones, of which they sold a grand total of a hundred. He blames the Cave Man (or Cave Woman) Principle: Our wants, needs, and desires haven’t changed in 100,000 years. If there’s a conflict between new technology and our Cave Man instincts, technology will lose.

Just as our ancestors demanded that a successful hunter provide “proof of the kill” (a hunk of dead animal), we demand hard copy instead of trusting a bunch of electrons. That’s why computers have not resulted in the much-predicted “paperless office.”

Years ago, I freelanced from an attic apartment in Providence, RI, where summertime heat and humidity can be brutal. Interviewing a corporate executive on a sweaty day, I was grateful he or she couldn’t see what I was wearing—or, more accurately, not wearing. My cave woman instincts definitely would not have embraced a picture-phone.

A self-piloted sports car, though. Cool.