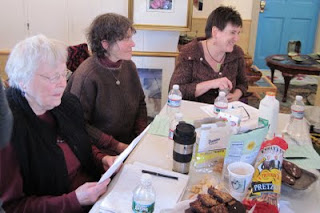 The remarkable experience of the Stonington Opera House/John Cariani playwriting course continues. I posted about this last month, and now it turns out that John, an insanely busy playwright and actor, is officially the World's Most Generous Person. The nine students in his class spent the past few weeks writing ten-minute plays, and he and a friend drove up from New York in a snowstorm to spend eight hours Sunday hashing through them and thinking of ways to make them produceable. Judith Jerome from the Opera House was there all day, too, and is actually thinking of producing the plays in some form next fall. The writers are going to meet once a month this winter, aiming for finished plays by May 1. 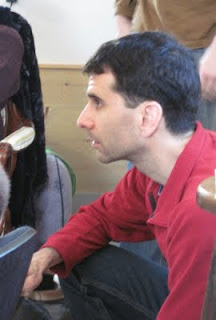 In the photo above, Nancy H., Maggie, and Sue sit at a work table that quickly became a food table. Those of us with laptops kept them on our laps rather than the table, because the food took up all the space, because there are priorities in this life. That's John Cariani at right, uncharacteristically serious.

I took the class to tweak my brain, and had no intention of getting serious about playwriting. But John's enthusiasm is so infectious, and this group is so well matched, that it's impossible not to get caught up in the joy of it all.

For example, below Nancy G. joins our friend and advisor John Not-Cariani in a dramatic reading of Amy's hysterical play about a bride with cold feet. Maggie's face (right) speaks for the rest of us. Amy's at left in the photo below left, with Nancy H. and Lauren. 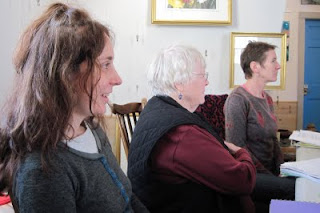 I have to admit I'm a bit flummoxed by the notion that my first-ever play could even be read aloud in public, let alone produced. Yet another lesson in toughening up the skin, I guess.

IN OTHER NEWS: As I write this, the ginormous storm that's been traversing the country is here and is changing from snow to ice, rat-a-tat-tatting on the roof and windows. The wind's howling, the trees are bent with wet snow, and it's hard to believe some branch isn't going to break a power line somewhere.

UPDATE: I had no sooner saved this post than the power went out for 16 hours. Rob and I had a lovely evening playing Scrabble, an event of deep significance that I will explain later.