Hooray for mind over matter. Rob had a terrible cold last week, and I ran around obsessively washing my hands in hopes of getting through the weekend without hacking and snorting and snuffling. I made it--the cold felled me the instant I got home Monday night. I spent yesterday in bed feeling sorry for myself, but thrilled that I hadn't sneezed all over Tatnuck Booksellers, various South Bostonians (Southies?) and my friend Larry, who gamely put me up in Cambridge even though he's madly preparing for graduation. (He administers Quincy House at Harvard.)

Health issues aside, I had a wonderful weekend. The highlight was Monday's visit to the Oliver Hazard Perry School in South Boston, where I sat in on seventh-grade classes (researching my dear Conor and his banshee) and then led workshops with some of the most delightful fourth and fifth graders I've ever met.

We did the Character Chase, an exercise in which we ask and answer 20 questions about a character, then chart his/her life so far, looking for a story. It gets very noisy, but it's a total hoot. The fourth graders' character was born in Spain and came to Boston in a shipment of garbage --who knew Spain was dumping its refuse here? He ended up being adopted and becoming a ballet dancer, so it all ended well.

The fifth graders' character almost shot his father and came down with AIDS, but they had pity on him in the end. He did jack a car, but he didn't get caught.

Here are the fourth graders: 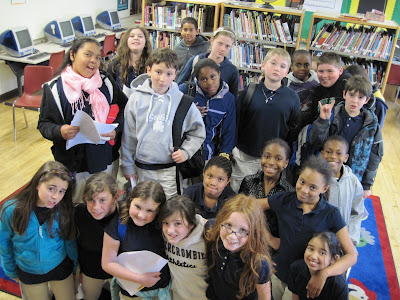 And here are the fifth graders: 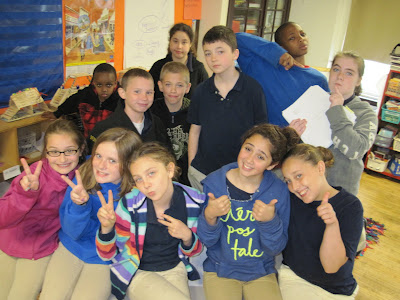 The young woman at right is holding the edited manuscript for THE UNNAMEABLES, exhibit A when talking about the importance of revision.

Speaking of which,  I spent Friday and Sunday evenings chatting with South Boston natives to make sure I'm not misrepresenting Southie too badly in Conor's tale. I was suprised at the number of things I have right, but I do have some alterations to make. My major mistake is that I forgot all about busing and the school lottery (amazing for someone who lived in Boston when Louise Day Hicks was in the headlines). Everyone was very generous with time and insights, and I'm tremendously grateful to them and to Kim Simonian for organizing it all.

The original idea for the weekend, of course, was the Five Fantasy Authors appearance at Tatnuck Booksellers in Westborough. The sun came out Saturday for one friggin' day in a long stretch of clouds and rain, so we spoke to a select group. But we had a great time anyway, and got to be on hand when Dawn Metcalf caught her first sight of LUMINOUS, her debut novel. It publishes June 30, so she hadn't expected any copies to be there and in fact hadn't received any herself.

Here she is, in the first flush of romance: 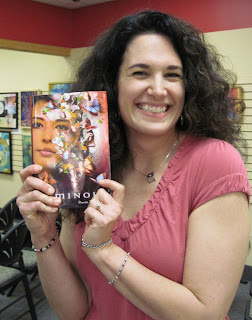 And here we all are (from left: Dawn, me, Marissa Doyle, Kate Milford, Deva Fagan).

Now I just have to get over this cold before I go to Chicago the weekend after next. Nothing like a panel discussion when you're deaf as a post from cold-ridden plane flight. I now know what my Printers Row Lit Fest gig will be, by the way: I'll be in a panel discussion called "Elementary, My Dear Watson" with fellow teen-lit authors Ilene Cooper, Brenda Ferber, Kristina Springer, and C. Alexander London. We'll be at The Mash Stage (the venue devoted to teenagers) at 12:30 p.m. Saturday, June 4.If you're in the Chicago area we'd love to see you!

The Revision Report: I know what I have to do. Now it's just a matter of doing it.

The Knitting Report: You're kidding, right? But I did wear my newest cotton socks (purple!) to Boston. I felt very glamorous. (Not really. I mean, they are purple cotton and I was wearing them with sandals.)

Posted by Ellen Booraem at 1:45 PM

I'd love to know more about the Character Chase, especially as I have a school visit on the 10th and am in the mood to try something new.