The Next Big Thing! Right here on my blog!

Looky here--a post in between book reviews! That crinkling sound--is that Hell freezing over? (Or I guess I should say "the Underworld.")

Anyway, Erin Dionne (author of the upcoming MOXIE AND THE ART OF RULE-BREAKING) tagged me for The Next Big Thing, a blog tour that started in Australia and has been edging its way around the world one author at a time. I'm thrilled to take my turn answering questions about my new book. Read through to the end to find out where we go next! 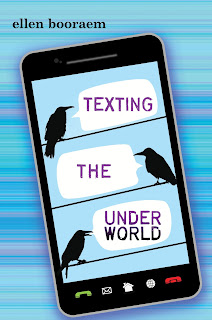 TEXTING THE UNDERWORLD comes out August 15 and I’m already bouncing around like a ninny.

What it’s about: Perpetual scaredy-cat Conor O’Neill has the fright of his life when a banshee named Ashling shows up in his bedroom. Like all banshees, Ashling is a harbinger of death, and she’s sure someone in Conor’s family is about to require her services. But she’s new at this banshee business, and first she insists on going to middle school. Even as Conor desperately tries to hide her identity from his classmates and teachers, he realizes there’s no way to avoid paying a visit to the underworld if he wants to keep his family safe.

Fortunately, he has a cell phone, and his computer-geek friend, Javier, will be holding down the home front. Here’s my editor’s favorite exchange between Javier and Conor:

CJ Adams (“The Odd Life of Timothy Green”) would be a great Conor, and Elle Fanning would be good as Ashling. (She’d have to dye her hair red.) The other major character is Grump, Conor’s grandfather, a banshee expert who’s kind of a loveable curmudgeon. Gotta be Clint Eastwood.

Dial Books for Young Readers, a Penguin imprint.
How long did it take you to write the first draft of the manuscript?

And now (*drum roll*), I hereby tag Lisa Gail Green, author of the upcoming THE BINDING STONE. Take it away, Lisa!
Posted by Ellen Booraem at 11:55 AM

Thanks, Ellen!! And I was glad to hear more about your book. I LOVE the premise and I'm glad you thought of me.