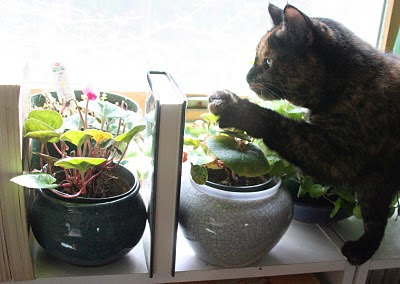 It's not the best exposure in the world, but it would be proof in a court of law.

All spring, The McGonagall Cat and I have waged the Battle of the Cyclamen. The minute one of them blooms (see the little splotch of pink on the left-hand plant?), M-cat sneaks into my office, tears the flower off, and spits it on the floor. Cyclamen blossoms are poisonous, supposedly, so I'm glad she's not eating them. But still...

I've tried barricading the most recent blossom. The result may be a whole new level of destruction. Why she's so obsessed with the cyclamens this year I can't tell you--last year they were in a more accessible place and she ignored them.

It's the challenge of the thing, I guess. Or some deep-seated psychological trauma involving squirrels. They mock her. I suppose I'd eat poison, too, if it were me.

IN OTHER NEWS: In case you're wondering how Our Little Town is faring after the Selectmen-Imitate-Lemmings event, we seem to be surviving. Turns out the situation is a) unprecedented and b) impossible, since selectmen can only resign to other selectmen. The first two resigned to the third, but he's stuck in place until we elect somebody for him to resign to. It may be that all three of them are still selectmen, since nobody ever accepted their resignations.

As it turns out, two of the if-not-now-soon-to-be-ex selectmen went in to the town office Tuesday and signed the warrant so the town can pay its bills. They also have signed or will sign a warrant for a quickie election. Three fine people have come forward to run for office. One of them is Stalwart Moderator George Eaton, who was instrumental over the past week in helping to sort things out. Obviously, we need him. Yay George.

IN STILL OTHER NEWS: We went to a local production of The Threepenny Opera last night, put on by the New Surry Theatre. I can't express how mind-boggling it is when someone you've known for 25 years turns out to be a chameleon onstage, and a singing chameleon to boot. Such a person is Annie Poole, mild-mannered painter and waitress the rest of the time. She played Mrs. Peacham, and she was chilling and funny and tuneful. The production itself was fun and inventive and classy. But Annie stopped existing for a while and Mrs. Peacham took her place, and that's just incredible.
Posted by Ellen Booraem at 2:39 PM

Aww, she's only protecting you from the evil poisonous blossoms at risk of her own life! *nods sagely and winks at McGonny*

You and Martje always take her side. *pouts*

Someone has to. Poor ickle misunderstood cattykins.

Hey Ellen, glad to see you guys at the show and glad you liked it. I agree - Annie was great!