Hear that crinkling sound? That’s me, turning over yet another New Leaf. From now on, instead of waiting for the Perfect Blog Post to wander in and crawl up my leg, I will simply Post. Oh, the excitement.

I bet you don’t believe me. Such a skeptical world this has become.

Anyway, what better time to start than with the monthly Book Review Club? (Which, oddly, appears exactly one month after my last post—thank you, Barrie Summy, for making sure I at least do this much.) Don’t forget to click on the icon to find this month’s other reviews. 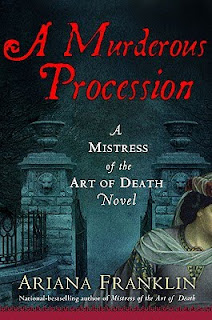 Sicilian pathologist Adelia Aquilar is an anomaly in 1176 England—a college-educated feminist, and a practicing doctor schooled in the forbidden art of autopsy. She is, therefore, utterly unbelievable. And I don’t care.

A MURDEROUS PROCESSION is the fourth book in Ariana Franklin’s “Mistress of the Art of Death” series, which follows Adelia from her arrival in England to help Henry II find out who’s murdering Cambridge’s children and blaming it on the Jews. She’s always homesick for Salerno, where her foster father is a Jewish doctor who has no objection to his wife and daughter following the same profession. In England, the role of women is such that she can only escape a witchcraft accusation if her Arab servant/mentor/friend, Mansur, pretends to be an Arabic-speaking doctor while she “interprets.” But she’s a talented forensic pathologist, and Henry won’t let her go home. By the second book she has tied herself to England further by acquiring a lover and a daughter.

This fourth book sends Adelia, Mansur, and the lover (I won’t say who he is in case you want to start the series at the beginning) traipsing through Europe as part of a royal procession accompanying Henry II’s eleven-year-old daughter, Joanna, to her wedding with the King of Sicily. Along the way, it becomes apparent that an old enemy of Adelia’s is also part of the procession and is plotting a gruesome revenge.

I adore these books, despite the odds. Okay, it’s a stretch that a twelfth-century woman would be quite as enlightened and accomplished as Adelia. (Although Eleanor of Aquitaine, Henry’s queen, would have kicked butt in any era.) Yeah, her lover is too consistently open-minded. And yes, it’s weird that a woman as smart as Adelia would be quite so stupid about religion, politics, and her own safety—the factors that keep getting her into trouble. It’s even a little hard to believe that Henry II would have so much work to offer a Sicilian woman doctor, no matter how talented.

But, oh, the medieval world! The details about food, clothing, daily life, travel, religion, politics, world view, and on and on! Franklin knows this era inside and out, and paints it in rich colors that seem true to life. Even Adelia and friends ring true, with suspension of disbelief.

The medieval world was equal parts erudition and ignorance, sophistication and credulity, restriction and freedom, comfort and misery, religious certainty and fear of damnation. Franklin weaves it all into a living, moving tapestry, as real as your foot. And she does it with humor—Henry’s a hoot (as he always is, especially when he’s Peter O’Toole), as are most of the characters burdened with testosterone. Adelia is exasperatingly, comedically befuddled when her status as a woman interferes with her medical practice. Supporting characters add deadpan humor without a modern author’s usual condescension toward “the Dark Ages.”
And there’s more than a touch of terror, appropriate to a time of hellfire and gargoyles. Franklin is capable of truly horrifying villains and means of murder. For sheer gruesomeness, there’s little to top the fate of Henry II’s Fair Rosamund in THE SERPENT’S TALE, a couple of books back.
In the current episode, we are privy to the villain’s thoughts, and therefore see devastation on the horizon when no one else does. You know a book has you by the gizzard when your brain screams, “No! No! Get out of there!”

It’s summertime. You don’t have much disbelief on hand right now anyway. So suspend it and enjoy.

Posted by Ellen Booraem at 9:25 AM

I love how you identify all its flaws and still make it sound appealing.

This sounds like historical FICTION, but I like that she gets the details right even if the premise is a stretch. More realistic than vampire, right? Great review on strengths and weaknesses.

I've seen this book and wondered about it. This was a truly great review. My favorite line was, "She is, therefore, utterly unbelievable. And I don’t care."

I'll go looking for this one.

OK, I'm replying almost a week late--hey, it's summer. The brain gets soggy.

Yes, gruesome but YES, Sarah, the details are everything! I hope you do pick it up, Alyssa.