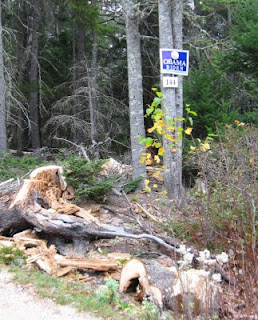 My Obama sign lives! Wish I could say the same for the poor ex-tree, the rotten stump of which you see to the left of the Obama tree.

Didn't used to be able to see all the dead stuff in back there. More chain-sawing for Rob. *sigh*

But back to the issue of the day, which is that I'm such a quivering bundle of nerves that I'm getting practically nothing done. Tomorrow I spend the day getting out the vote, and Wednesday I go to Eastport, so it would have been nice to have been more productive today.

But instead I check the NYTimes web site every half hour, hoping to see a headline that says, "Obama hits 270 electoral votes in early voting." Or, "McCain concedes, says he didn't really want to be president anyhow." Or, "Time change speeds up rotation of earth. It's really 11 p.m. Tuesday. NBC calls election for Obama."

I'd really like this to be over now, thanks.

A possible distraction: P.J. Hoover is celebrating the launch of The Emerald Tablet over at the Class of 2k8 blog. The book sounds like a hoot and a half and I want it almost as much as I want this election to be over.

Another possible distraction: This extremely funny video. It's been around for a while, but it's still a gift today.

I won't bother to say VOTE because I know you will. It's tomorrow, by the way.
Posted by Ellen Booraem at 1:47 PM

I'm right there with you, Ellen. I will be nervously awaiting the results all day tomorrow...while I'm stuck in a meeting with no access to internet, TV, or radio. *sigh*

You're probably well off, Sandi. Nothing to be gained by obsessively checking the web, which I probably will be when I'm not working GOTV. Hope the meeting takes your mind off it all!

I figure I'll just leave the tv on (something I never do). But this is a special day. Okay, Ellen, I love the colored VOTE in your post!

So change won! My daughter - who's in media studies and poopoos most of my interests - laughed as hard as I did at the video. Oh, and I got your book on my pile - it's next, after my current rip (reading in progress). Totally looking forward to it.