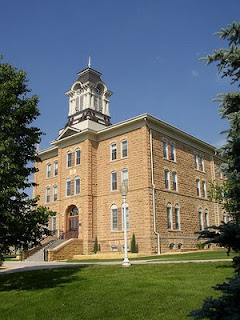 It's official--Rob needs to pin a note to my sleeve when sending me off on a plane anywhere.

A couple of years ago, traveling to Florida with my friend Shelly, I allowed my wallet to fall out of my backpack during the flight and sashayed off the plane without it. Since it contained my only ID, life became somewhat fraught. Shelly had to pay for everything because I had no credit card and no ID for traveler's checks. We both had to go through Super Duper Ginormously Paranoid Yet Oddly Jolly inspection upon returning home. (This included the puffer machine, which somehow detects explosive residue by blowing air up your shirt. I'd do that one again in a heartbeat. )
This time, I left my camera on the Minneapolis-Detroit plane, and only realized what I'd done minutes before my Detroit-Bangor flight left. So today I began the phone trek from lost-and-found to lost-and-found, not the slightest bit optimistic because I had not taken the precaution of putting my name and address in the camera case.
Figuring, of course, that only a dunderhead with a nearly fatal level of dunderity could possibly lose a digital camera. Which, as it turns out, is true.
So, I have no pictures of the lovely seventh graders and college students with whom I visited.
There above, in lieu of them, and possibly as a placeholder for them if the planets align in exactly the right way with intercession from Saint Dunder, is a picture I stole from Wikipedia of the Gustavus Adolphus College "Old Main" building, where my friend Lisa has her office. Nice building, isn't it? I think that's Lisa's window to the left of the front steps. She has a great view of St. Peter, Minnesota, and environs, but I can't show it to you because a) my camera's gone and b) I didn't actually take a picture of it.

And c) I'm a dunderhead.

A dunderhead indeed! You were in Detroit and you didn't even call!!!

*realizes you were probably only in Detroit for about 29 minutes...*

Bummer about the camera though. I hope it turns up.

Glad you had a great trip, but sorry you lost your camera. ;(

Oh Pepper, I know! I was thinking of you as I flew in to Detroit, and was kicking myself because I actually had about 90 minutes between planes. I thought I'd call after I grabbed something to eat, but then I noticed the camera's absence and everything else went out the window.

It IS a bummer. I feel SO STUPID!